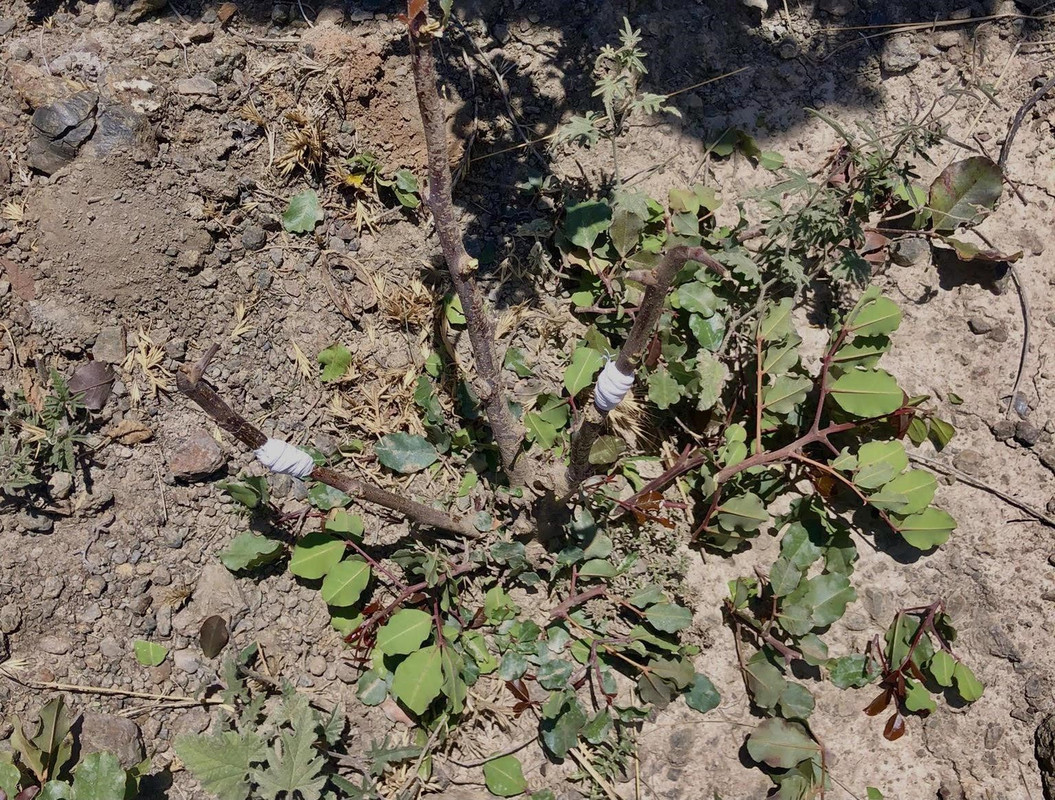 On this day, which will be forever remembered as the day I learned to appreciate branches, the University of Virginia interns traveled with the High Atlas Foundation (HAF) to the outskirts of al-Haouz province to engage in the art of tree grafting. Tree grafting involves taking a piece of a male branch, slicing it at a specific angle, and then attaching it, with gentle but confident handling, to the stub of a female sampling. Here, the two branches, now stripped and severed with a pair of shears, meet for the process of reciprocal healing, and eventual growth. At the space where the two different branches converge, tape is applied, like a band-aid, to the organisms’ wounds. After about a month, the wounds scab over and the branches are no longer branches, but rather a singular branch– nothing but a slight wooded ridge evidencing that the original and its appendage were once two separate life forces.

As we crouched around the amputated saplings, holding a bundle of branches with mirrored amputations in our hands, I felt overwhelmed by the potency of unearthed symbolism. In the dirt, I sketched ideas for how I could make the poetic subtleties of branches and tree grafting relevant to the human world. Co-creation, relationship building, knowledge sharing, could all serve as parallels to this process. Leaving behind the married branches and the endlessly rolling hills of al-Haouz, I felt certain I understood the angle and voice through which I hoped to approach this piece.

But now, I am sitting on a metal train, laptop fan competing with the stubborn noise of the metal wheels scraping along the metal tracks. The florescent lights adroitly poking my head, the tinted window obscuring any memory of fresh air. All I want to do is sit still in the dirt, find a branch, and hold it in my hand. Hold it like I would hold a loved one, hold it until the bark feels natural against my barked flesh, hold it until branch is indistinguishable from hand. And now I am wondering why I so desperately needed to make a metaphor out of the process of tree grafting; why my instinct was to force language as a connective tissue between the human world and tree world. Are they not already the same?

In the al-Haouz province, farmers look over the trees with the same prideful tenderness given to kin. Watering the trees is an art and a science; the trees nurse from a hose that nurses from the well that nurses from the earth. The farmers take modest sips from the same hose every now and then, basking, alongside their tree kin, in the miracle of flowing water. The weaker saplings are watered with a measured eye, planted tactfully under the shelter of adult trees—under the watch of the farmers and the full-growns; not even the winds are to tamper with the force of these trees, the force of the community.

Just as the farmers see to the trees with patience and paternity, the trees see to the farmers. Once grafted and grown, the trees offer Carob fruits. From the Carob comes oil, from the oil, a source of income for the province. The trees and the people of al-Haouz exist in an ecosystem of reciprocity: a world that is the same. There is no need to make a metaphor of grafting, for the connective tissue between the trees and the humans is already there.

And so, here I sit on a metal train, wondering what went awry, wondering when I began positioning branches in my periphery, wondering when I began considering myself as an independent life force. I don’t have the answers to these questions—if there is a locatable moment for correction, or if my inclination to a separate human world manifested over time, progressing with the same subtlety as a Carob sapling. I do know, however, that as soon as these metal wheels stop scraping against these metal tracks, I must go revel in all that a branch is, all that I am beside the branch, all that the branch and I are together.

Livie Nute is a Global Studies student at the University of Virginia currently interning abroad with the High Atlas Foundation in Marrakech, Morocco.

By Ryan Winegardner, UVa/HAF student-intern The community members and the HAF team unloading and organizing the tree saplings (credit: Ryan Winegardner) There is a great horror and a…