Recently, I joined volunteers and staff of the High Atlas Foundation (HAF) for a dental health awareness event at the schools of Bouchane.

Seventeen American dentists traveled with us to rural Morocco to improve oral health and hygiene practices, beginning with a short welcome ceremony upon our arrival in order to get to know each other.

After a short instruction on how to brush teeth properly, the children were first sent by a volunteer to the general check-up by a dentist. Myself and another volunteer then sent the children to await either polishing or dental surgery. The majority of the children had healthy teeth; however, they were often brown, not from poor oral hygiene, but rather from phosphates in the water that bring decay to teeth.

By mid-afternoon, we gathered in a dining room, where school children danced and played music while we were eating chicken couscous. Shortly after lunch, we began to work again. I was with Arabic-speaking volunteers and attended a cultural activity with a class, where children had to connect pictures of Moroccan provinces with the corresponding province on a map. After the lesson, we continued our morning jobs with the others to guide the children to the right rooms, then leaving for Marrakech in the late afternoon.

The next day began like the previous one with an early morning departure and a visit with a smaller group of dentists and staff members to another school where we checked the teeth of children aged six to ten. This took about three hours, after which we had a lunch of chicken couscous again: a favorite, traditional dish that is always appreciated. After lunch, my assignment was to work with a staff member to play with the children after their dental surgery while the other volunteers continued the other work from the day before.

On the third and final day in Bouchane, I assisted the dentists in the operating rooms, holding the children’s hands to keep them calm and prevent mishaps while they had their teeth extracted. Other volunteers played with the children and gave them medicine in the post-op area. Following a mid-afternoon lunch of—you guessed it—chicken couscous (just as delicious as on the previous days, prepared by the villagers’ loving hands), we completed extractions for 20 more children before saying goodbye to the people of Bouchane. 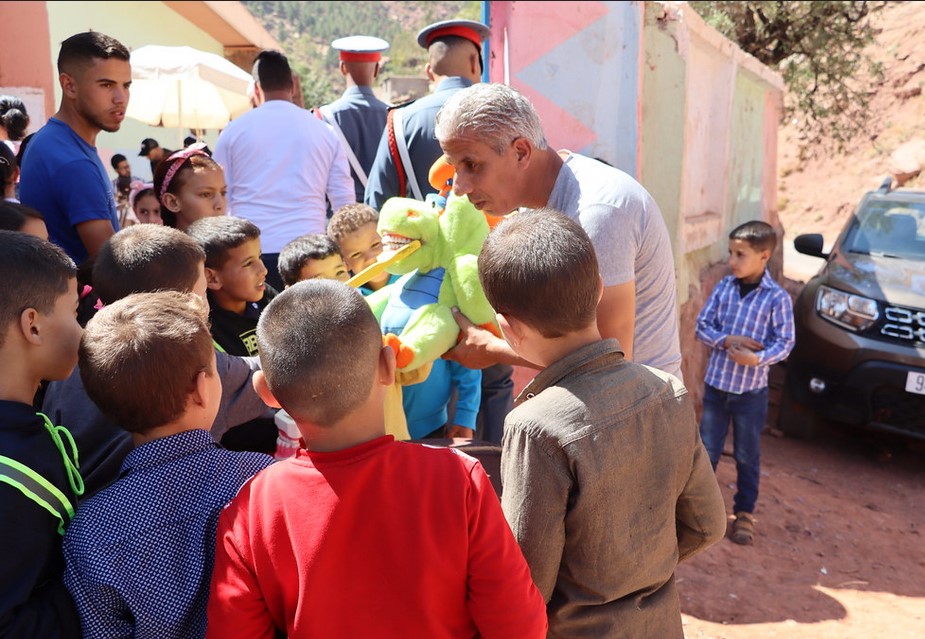 On my fourth day of volunteering, we went to a school in Oukaimeden, a small village in the mountains. This was my first day in Morocco that was not 30+ degrees Celsius. High in the mountain, from where the mothers could watch their children, my job was to work with my Austrian colleagues to paint children’s teeth with a special paste to strengthen and whiten them.

We were an efficient team as we varnished the teeth of 119 children in just three hours.  The community served us again with chicken couscous and lben, a kind-of soured milk. As this school was smaller than the one in Bouchane, work was often outside. For example, one staff member instructed the children in the school’s garden while my friends and I varnished the teeth in front of one classroom. After 43 children, the working day was over and we went home.

We were again in Oukaimeden on the final day, where my job was again to help with varnishing the children’s teeth outside, in front of the classroom. We were finished by midday since only a few children were brought to school (as it was the sabbath day). For this reason, we took our lunch at a rest stop along the road back to Marrakech, reflecting on what was a very interesting, fun, and meaningful week.