Decentralization of Renewable Energies: Akrich is the First Step of Many The general assembly of the Moroccan Platform for the Decentralization of Renewable Energies visiting Akrich.

The High Atlas Foundation together with GermanWatch and the steering committee of the Multi-Stakeholder Partnership Project (MSP) have been carrying out their work on the decentralization of renewable energies in order to ensure the promotion and the continuity of this purpose-driven approach which is fueling an important transformation in the energy sector.

The general assembly of the Moroccan Platform of the Decentralization of Renewable Energies (La Plateforme Marocaine de Décentralisation des Énergies Renouvelables – PMDER), held on March 26 and 27, 2021, provides ample evidence of the on-going efforts made by the HAF and other policymakers in this respect. The assembly’s vision is to influence decision-makers to promote effective decentralization policies of renewable energies in Morocco through the democratization of access to energy. It was an opportunity to shed light on the positive impact that alternative measures, as opposed to state-owned utilities and large energy providers, have on the environment as well as the local economy in the long run.

HAF President Dr. Yossef Ben-Meir began the event with an introduction to the nursery, its history, and its leading role as proof of cultural co-existence and partnership as well as a community-led project that provides support and opportunities for the locals. Imane Akhezzane, HAF Programs Director, introduced the participants to PMDER. Moulay Hassan Aladlouni, HAF Country Director showed gratitude toward the partners who contributed to the success of the nursery of Akrich. Hajiba Boumasmar, HAF’s Program Coordinator, provided a perspective of how the solar irrigation system benefited the nursery and also contributed to the initiatives of renewable energies as a way to fight climate change. The solar panels, funded by FENELEC, provide electricity for the irrigation system in the Akrich nursery.

The participants in the general assembly had the opportunity to make a field visit to learn more about the eco-friendly solar-powered irrigation system in HAF’s nursery in Akrich. The system was donated by the National Federation of Electricity, Electronics and Renewable Energies (FENELEC) and was inaugurated at a ceremony that was held at the end of February. During the field visit, the general assembly participants were guided by Abderrahim Beddah, the nursery caretaker in Akrich, who discussed the positive impact that the solar energy system has on the nursery, particularly how it has already lowered the electricity bill by 75% in its first month of usage. The use of solar energy to pump water from the nursery well has also minimized the quantity of water that is wasted since only what is needed is drawn.

The members of the steering committee of MSP had also the chance to visit another HAF nursery located in Tassa Ouirgane. This nursery is 100% managed by young women from the same region who are part of the Takhrkhourt Cooperative. This nursery has provided the opportunity for the women of the cooperative to advocate and act on their needs and goals. It is also a source of income that has helped them to start living an independent life, aiming to create agents of change who are capable of taking action and making life-changing decisions that will later reduce obstacles for women and acknowledge that they are a firm pillar of society. Members of the High Atlas Foundation and the PMDER planting a tree, an act embodying their vision.
The general assembly of PMDER was a fortuitous opportunity to bring together professionals and experts in the field. The first day, which concluded with a round table discussion, addressed potential challenges and areas for improvement. This meeting stressed the importance of decentralized renewable energies in meeting the needs of the local population of Tassa Ouirgane in particular and rural Moroccan communities at-large.

There were three main takeaways from this gathering. The first is that stakeholders must adopt an inclusive decision-making approach that actively involves all those who would be directly affected by the outcome of the decision. Second, the ideas related to decentralized renewable energies must be simplified so that they may be more easily understood by all the parties and communities. Finally, measures must be taken to prevent any potential technical problems that might arise, such as the overheating of solar panel batteries and the development of effective strategies to better maintain energy-related equipment in the long run.

Help HAF make these goals a reality and bring renewable energy to communities across Morocco by making a gift on our website or Global Giving Page. 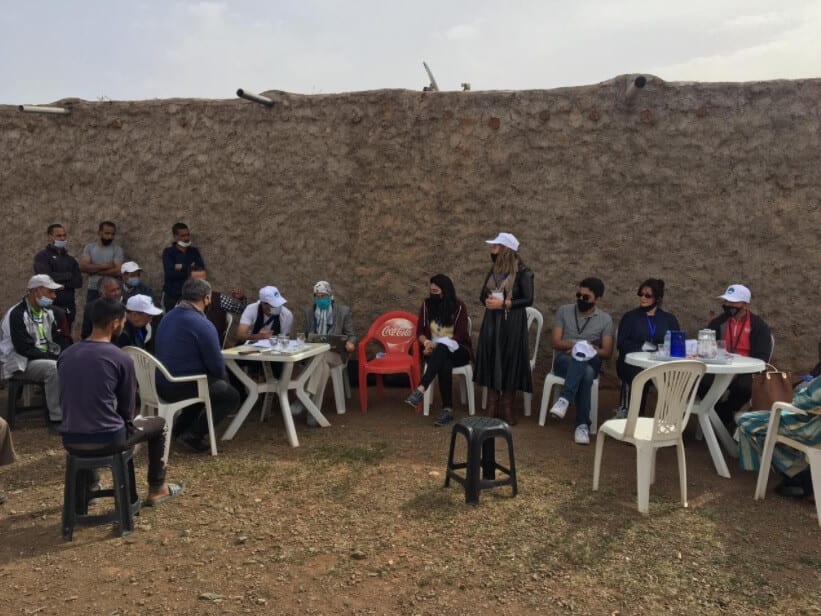