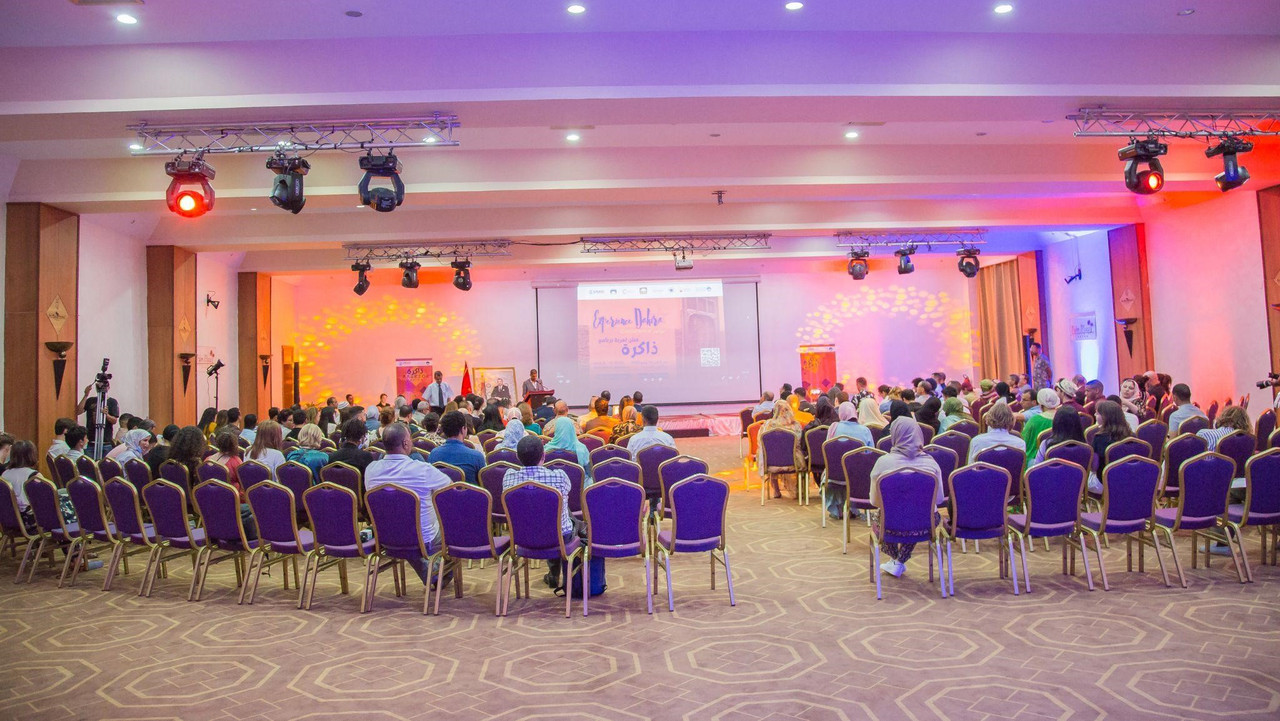 From June 8-10, the High Atlas Foundation organized “Experience Dakira,” a conference of multiple organizations dedicated to enhancing religious and cultural preservation, learning, and social cohesion in Morocco as part of the USAID Dakira program. Immediately upon walking into the Palm Plaza Hotel, this year’s conference venue, I was awed. Intricate designs lined walls that seemed to continue endlessly upwards- a space fitting for a conference about preserving Morocco’s rich multicultural history. Cultural project showcases lined the hallways leading to the main conference room. There I was asked to put my name on a world map already mostly filled with the different hometowns of those in attendance. Based on the markings on the map, the room contained an international audience eager to learn about Moroccan culture.

Fatima Zahra Laaribi, HAF Women’s Empowerment Trainer, began the conference with the Beyond Women’s Empowerment presentation. She asked a prestigious panel consisting of Latifa Bouazza, Rachida Outoucki, Jamal Hadadi, and Naima Ben Benazzi questions relating to the Moroccan woman’s role in preserving their heritage and culture. They discussed the fact that Morocco has a multifaceted identity and women often serve a huge role in transmitting this identity to their children. Empowerment can help women to better find ways to pass on this heritage, enabling them to fully embrace their identities and express themselves better. Ms. Fatima Zahra observed that we are all witnesses to stories told by the women in our lives, but she also said that empowerment should go beyond memories and focus on self-sufficiency for women. During the Growing Edge Activity, a process that women in every IMAGINE workshop complete, a man from the audience stated powerfully that a woman is the focal point of Moroccan culture. Mouna Mnouar, President of the Association Sais de Développement et Solidarité in Fes, continued this observation by stating that the biggest hindrance to the empowerment of women is the memory of man and she hopes to help change the way men think until all of Morocco believes that men and women are equal. 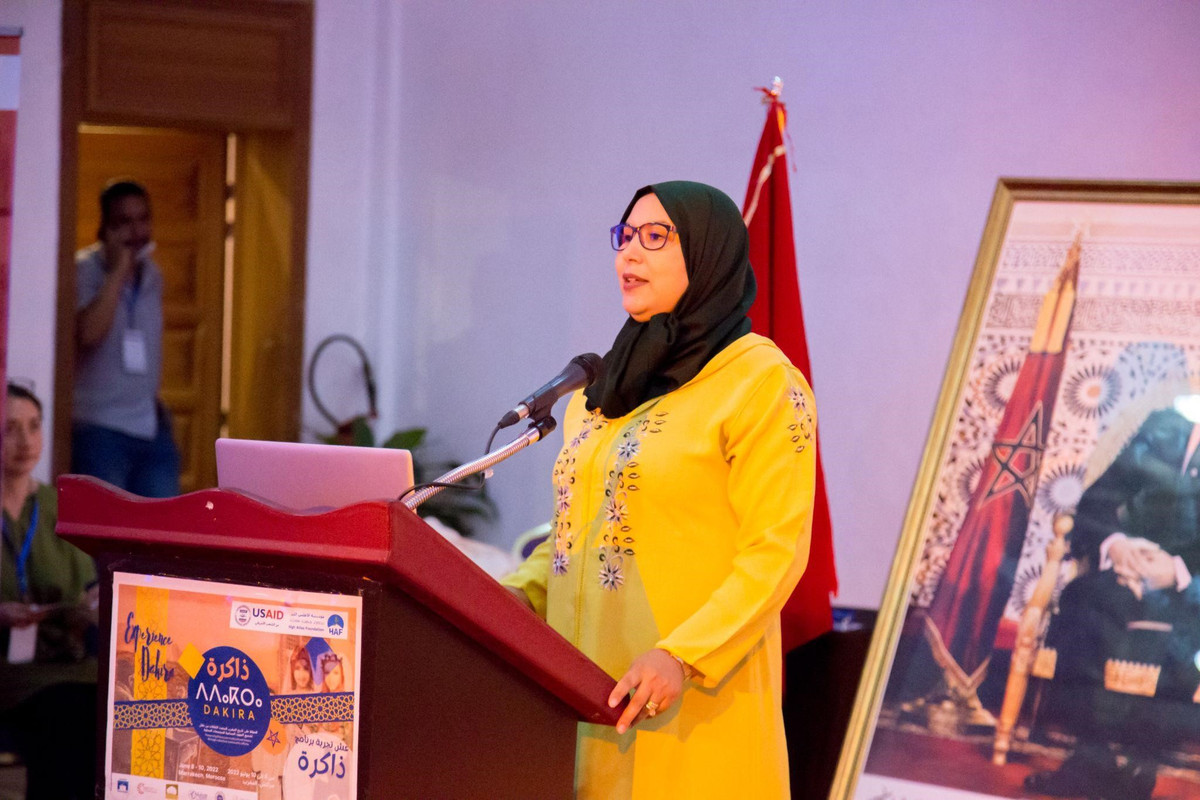 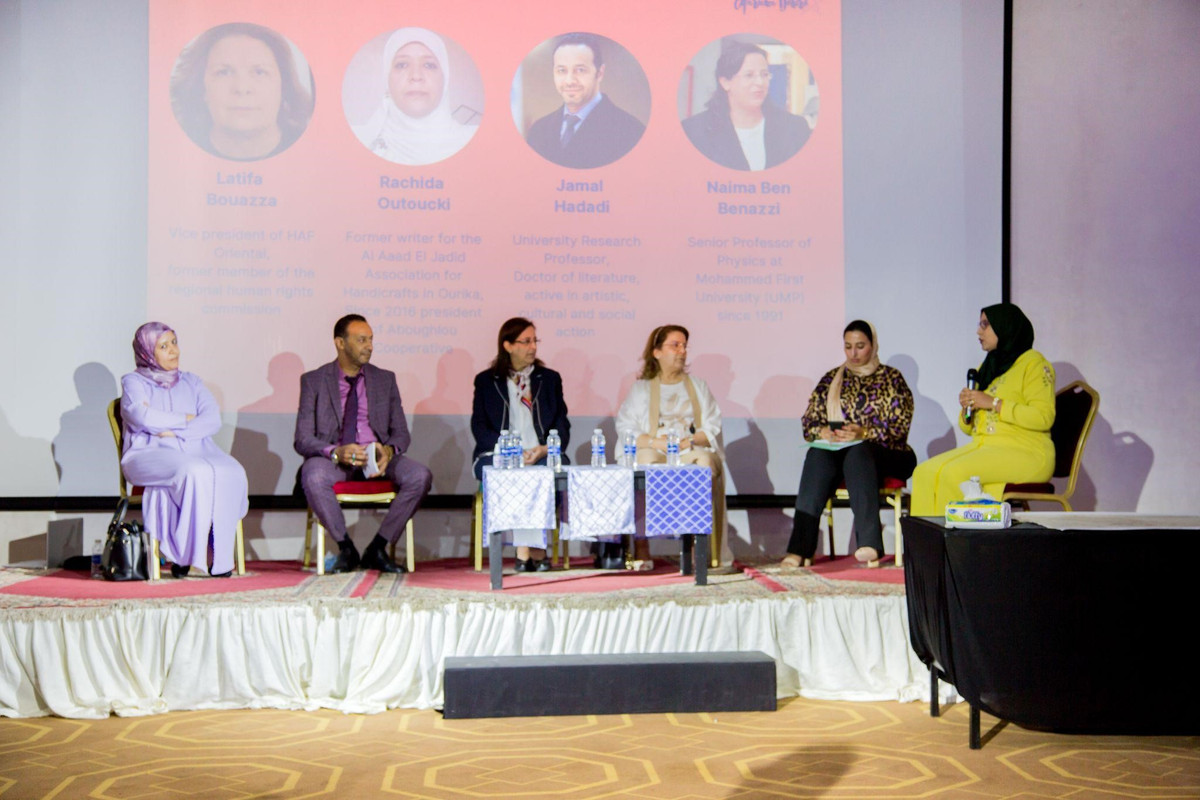 The next activity was the Heritage Travel and Pilgrimage presentation which discussed how the memory of Jewish Moroccan culture can and should be preserved through tourism. There are over 6,000 saints buried in Morocco and Jewish peoples from all over the world come to pay their respects on the day of death, or the Pessah. A big focus of this program was the targeting of Jewish youth, as it is generally only older people of the faith who come to Morocco on pilgrimage. This program has been training Hebrew speaking tour guides to be familiar with the Mellahs, or Jewish quarters, of the major Moroccan cities. One of the speakers who learned about many Jewish traditions through her work as a tour guide emphasized the importance of trust and finding similarities. Another speaker, a resident of her city’s Jewish quarter, learned Hebrew so that she could connect with a lost part of her identity, stating that one needs to know themselves before they can transmit anything to tourists. The presentation ended with a discussion of food, as a large part of Jewish Moroccan culture surrounds food, and the project promoted this importance through the 2022 Jewish Moroccan Food Festival, hosted by Mimouna Association, at the end of May.

After a quick coffee break, HAF Dakira Cultural Coordinator Omaima Khalil El Fanne facilitated the Engaging Youth in Heritage Learning presentation. When Moroccan children from rural areas are asked what they have, they say nothing. However, there is a rich culture about which these children are not aware, and the Dakira program seeks to revive that culture amongst these youth. The Essaouira Mogador Association does this through music and arts, inviting children from the city and surrounding areas to join in a choir or theater club. Association ARGANIA provides youth with platforms to participate in dialogues regarding Moroccan culture, helping them to inherit and be ambassadors for the city. Association Mimouna helps children to connect to their heritage through sports and has previously hosted a large soccer tournament that gathers people from the Mellahs of many different cities.

The day finished as it began: with a pondering of identity and Moroccanness. The consensus reached was that Moroccanness is not about politics, ethnicity, or money. To those in attendance, Moroccanness meant identity, peace, family, and hospitality. It was something that held so much meaning that it could never be fully defined. Due to the hard work of all of the organizations present at the Experience Dakira conference, the diverse heritage and history of Moroccanness will be preserved for many generations to come.

Ryan Winegardner, UVa/HAF student-intern When the High Atlas Foundation (HAF) team took the University of Virginia interns to Akrich, it was the first time we had left the…

Coming Together for Cultural Preservation and Celebration