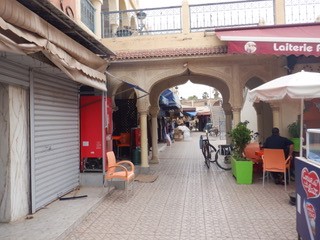 When geologists drill core samples, they’re making historic records in the form of cylinders of ice that contain the climate conditions of hundreds of thousands of years ago. The scientists can select a point on a field of ice, drill into the earth to collect it, and from that sample understand the entire field. This model of data collection offers virtually no breadth, but incredible depth. On our trip to Agadir and Tiznit, I identified a parallel method of data collection for people. Perhaps the best word to describe it is qualitative interviewing; it is a method that falls under the direct contact we discuss in class. The method boils down to curiosity: in the meeting with the council president of Souss-Massa, at a jeweler’s shop in the medina, and at a Jewish cemetery in the mellah, we had conversations with people about their work, their children and their parents, the things which brought them happiness. These snapshots into people’s lives, like cylinders of ice, are historical records of narrow scope but immense depth.

The council president of Souss-Massa, Karim Achengli, does not prioritize any province in his region, but he worries most for one in the south and one in the north. He used to be a businessman in automobiles. He plays with his kids every day after work, so how could he not be happy? He described meeting his vice president like falling in love with his wife; he likes to make people laugh. A meeting that was originally about where HAF should plant trees became an introduction to some of the inner workings of a major leader in the region. Talking with Mr. Achengli individuated him, separated him from his office, and humanized him. Rather than a public representative, he became a person who cared about his community.

We walked through the medina, found a silver shop, and spoke with the shopkeeper for a long time. In 1972, his father opened the store, which he inherited in the nineties. His daughter is taking her baccalaureate exam, and the stress of it makes her cry; his nine-year-old son will likely inherit the shop because he most likes visiting it. The price of gold and silver has risen, which hurts his shop. Every couple of days, he visits the farm where he grows watermelon. He brought some to the shop and insisted that we take one, no charge. He showed us pictures of the sunset on his land. We received an intergenerational history from the shopkeeper in that he told us about his father, himself, and his children. Since we learned about his family and shop so particularly, I began wondering about the other silver shops on the street. They all must have been affected by the price of gold. They all must have parents and children whose lives revolve, intimately or distantly, around the shops. How many shopkeepers inherited their storefronts, and how many will pass them to their children? Do they all love the street they work on, like the man we spoke to, or do some of them resent the cobblestones they have worn down over the decades?

Finally, we visited a Jewish cemetery. The guardian, Mohammed, praised the Moyal family for funding the cemetery and caring for Mohammed’s well-being. He plays sports every morning and listens to music while he cleans the graves. Talking to people brings him the most joy. He has three children, and he thinks his youngest child will replace him one day just as he inherited his job from his father. (Similarly like the circumstance of the shopkeeper, it seems common for jobs to stay in one family here, generation after generation.) He cannot feel restful when he is not at the cemetery because he feels something like kinship towards the dead whose memory he protects.

We traveled to Tiznit with a busy schedule. We met with a few schools, smiled, and waved at dozens of children, listened and observed several meetings with cooperatives, but I learned the most about Tiznit and participatory development from conversations with people we met by chance, or in settings that I thought would be strictly business. Find a narrow core and drill deep, and trust that human connections will grow into community connections.

By Ryan Winegardner, UVa-HAF Student Intern Keely Fitzsimmons/HAF In the fog at the third school we visited outside Tiznit, I stood on the rocks on the hill and…

By Sabine Stratmann HAF-UVA Intern Three interns sitting across from me sparked a game to play. One girl suggested that the people around her should shout out random…