In early July, I set out with colleagues of the High Atlas Foundation—a U.S. and Moroccan non-for-profit organization—to meet with agricultural cooperatives in Morocco to understand their needs and goals and create action plans toward lasting development. Along the way, we visited Jewish and Christian cemeteries, and met their caretakers and neighboring community members to discover their heritage stories.

The first of such visits was to the adjacent Jewish and Christian cemeteries in Berkane, in the northeast’s Oriental Region. The 300-year-old Jewish cemetery is directly behind the house of its guardian, Said, a third-generation caretaker bestowed with responsibility for maintaining it. Among the last to be buried there were Esther and Benoon, who lost their lives in a 1964 car accident. Said remembers the engaged couple’s burial as having taken place on a Friday. 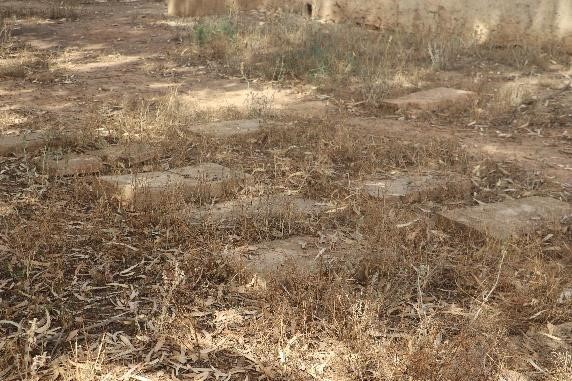 With the pandemic, visitors have not come to the cemetery since 2019. Therefore, contributors have not been there to ensure the removal of overgrowth or even the provision of compensation for Said. We calculated that the removal of all the accumulated brush will require five people working for seven days, and we immediately organized the payment from a private contributor. The cemetery’s paths are now clear, without an overrun of thorny brush, and becoming, just as the many young souls we observed from the carvings on the gravestones that had passed before a ripe old age under the sun. 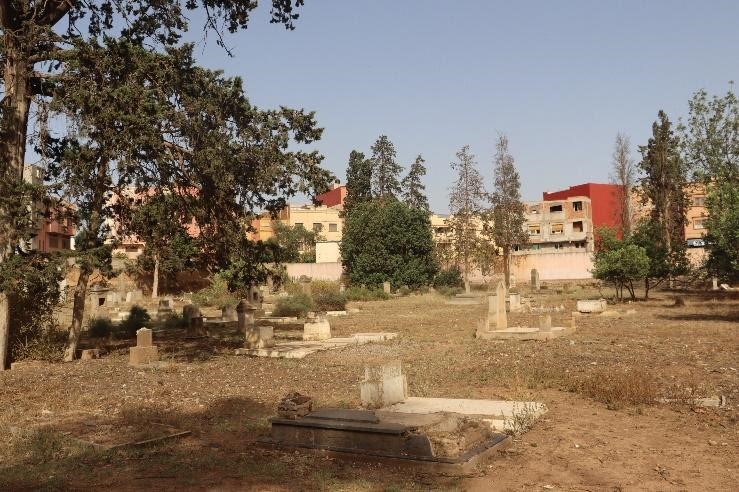 The Christian cemetery in Berkane is larger than the Jewish one there, with the most recent burial being that of a gentleman, a cafe owner, in the mid-1980s. His name, as the locals knew him, was Paco. The density of brush here, perhaps owing to it being more spread out, seemed less than the Jewish cemetery. Its caretaker Said has also been left uncompensated but is likewise committed to its protection. Of course, the protectors are the Berkane community, the Moroccan people who here and all over the Kingdom respect the graves of those of all religious paths that constitute the national identity of the country.

The following day, we traveled to the town of Ahfir in the same region and visited its Jewish cemetery. We met its guardian, Abderrahim, and his mother as well. His father passed away at 48 from a blood infection. Abderrahim is also a third-generation guardian of this cemetery, and he too has done so in recent years without compensation. He is the sole provider for his family, which includes his two siblings, earning money as a part-time server at a local cafe where he receives 60 dirhams ($7) a day. The family is struggling. Abderrahim wants to be a heritage caretaker but feels compelled to find employment outside of Ahfir in order to support his family. 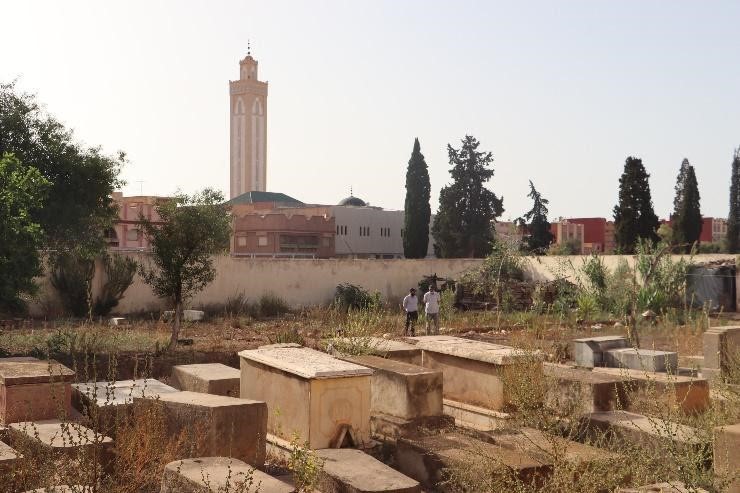 A view from the Jewish cemetery in Ahfir, a village in the Oriental region of Morocco. July 2021.
(Photo: Katie Bercegeay/HAF)

Abderrahim’s story reminds us of the countless stories of Moroccan rural youth who would much prefer to work and gain a livelihood in their home communities but are obliged to seek employment in city centers in order to sustain themselves and their families. By all accounts—sincerely emotional in the retelling—Abderrahim’s father, Mohammed, was a beautiful man and is sorely missed.

The stories that arise from cemeteries would take lifetimes in the telling, but I feel most drawn to their caretakers’ stories, those who inherit this responsibility from their fathers’ with complete acceptance. In a sense, they are raised as stewards of heritage—a life’s mission accompanied by economic struggle. Of course, this is not the case with all cemeteries in Morocco, especially as one approaches city centers. However, in these remote, more distant communities, where heritage memory is fading, caretakers are less supported, and some—like those we met—not at all. 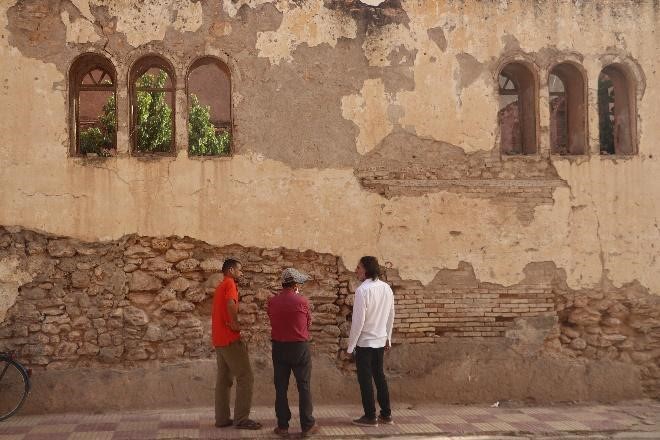 While in Ahfir, we also visited the outer infrastructure of what was once a Jewish synagogue. Peering through the old, thick walls, we viewed an interior gutted in places and overrun with trees, brush, and trash. All is eventually lost in time, and perhaps these cultural remnants are also naturally lost when those who have lived the culture are no longer there. One can say, though, that Moroccan Jewish and Christian lives have not been solely unto their own enclaves of people, but rather a part of Morocco’s life and integral to Morocco’s identity. If their existence and influence is forgotten and not upheld, an essential part of Morocco itself might be lost in places, maybe even already beyond retrieval. It is said that a person is forgotten when the last person who spoke their name is gone. Being remembered is not just for the subject’s own remembrance, but also for the people doing the remembering as they discover in themselves and society a sense of peace and solidarity. 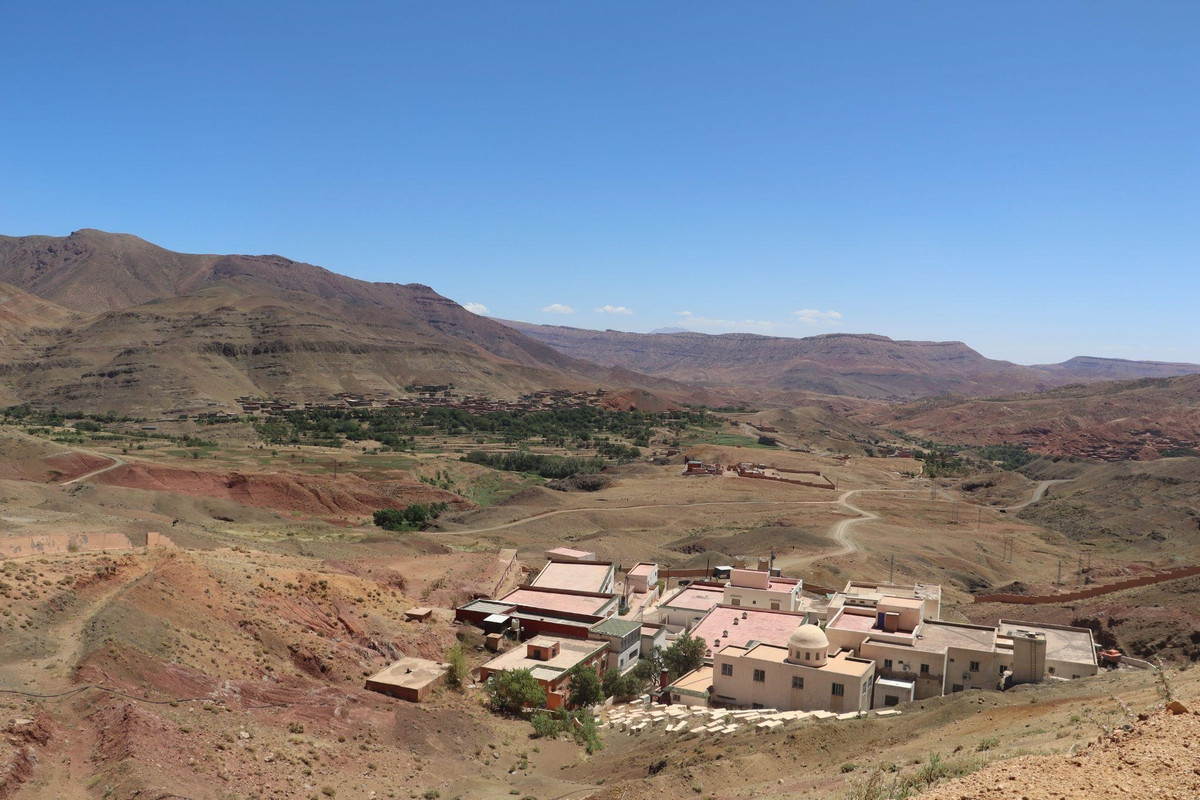 July 7 marked our visit to the burial site of the Hebrew Saint David-ou-Moche and the community fruit tree nursery that was built on the mountainside’s new, one-hectare terrace well above the saint’s resting place. For me, this thousand-year-old pilgrimage destination is perhaps the starkest reminder in my life that people’s development is a function of unrelenting persistence and most fortunate happenstance. Before I knew it was a Moroccan Jewish burial ground, in the mid-1990s, it was to me a barren, eroding mountainside with an inexplicably beautiful old, white structure that seemed at once in and out of place on the south side of the High Atlas Mountains. I felt then that this mountain could be terraced and become the location of the people’s tree nursery that would enable their transition from growing barley and corn to the much higher-income-generating, organic fruit trees, such as walnut, cherry, and fig.

Twenty-five years later, it has become just that with funding from the Moroccan government’s National Initiative for Human Development with the direct support of His Majesty King Mohammed VI. The Secretary General of the Moroccan Jewish Community, Serge Berdugo, completed the partnership to lend the mountain area above the Saint without cost to the surrounding communities. Dreams become reality by holding fast to them. 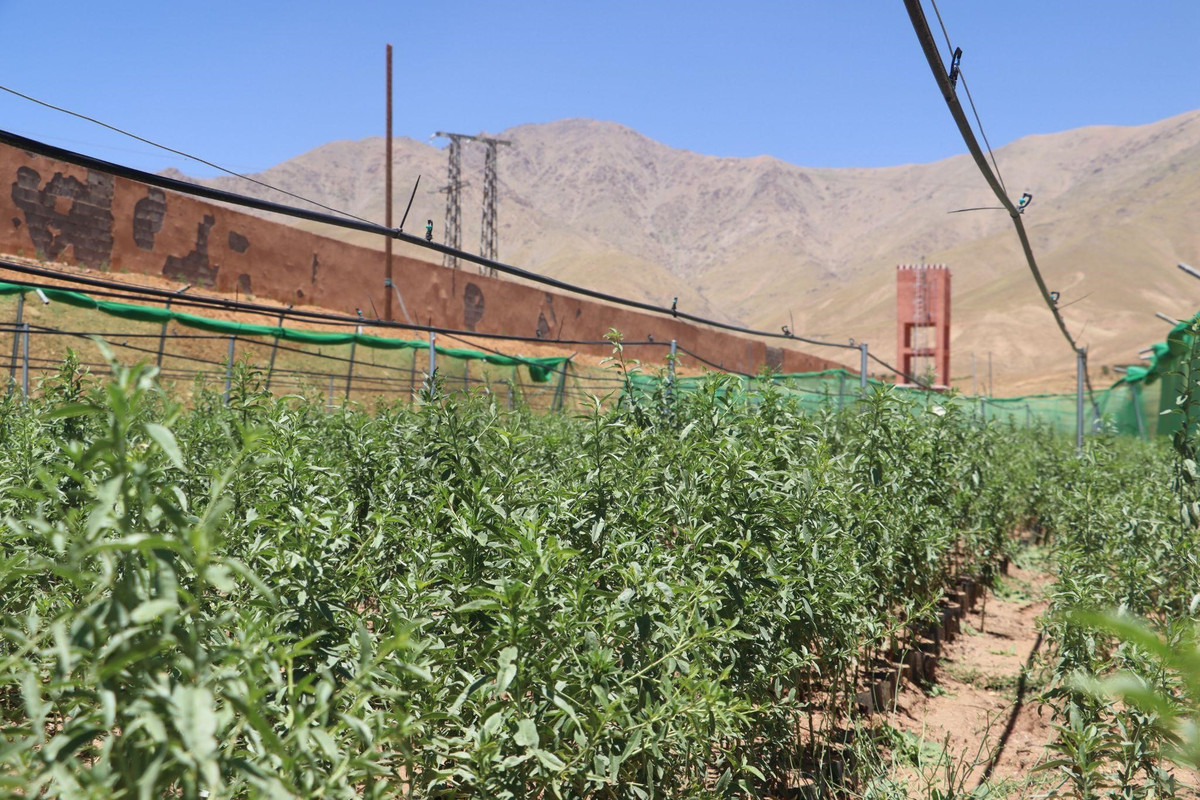 Later that day, we traveled 50 kilometers further east along the same road, reaching the very beginning of the Souss watershed to visit the Toubkal Municipality. Jewish life up until the 1960s seemed part of the natural life itself, like Tifnoute’s river and the surrounding tallest peaks in Morocco. Absent any wall or demarcation, history now a diminishing remembrance, the Jewish cemetery in Imlil (Souk Larbaa) is yet upheld. The cemetery is revealed by its tall vegetation, since the people respectfully do not graze their goats and sheep there.

I lived in this location as a Peace Corps Volunteer from 1993 to 1995 in a village further up called Amsouzerate. My most consistent pastime was to sit with the father of the house where I lived, the late and good Omar Himmi, who passed in 2019 at the age of 103.  Listening to him, I learned detailed stories about the long-gone personalities from the surrounding Muslim-Jewish life in this very area. There was solidarity as well as separation. There was integration as well as acts of exploitation. There was closeness of love, the depths of human bonds, and real sorrow with any loss. It was complex and comfortably functional. In a sense, it was also incomplete, cut short, with potential that might have been transformational but that was not seen through. My own first-generation Iraqi Jewish American identity led me to make a discovery here, accompanied by a longing for the heritage experience I might have had. Perhaps I was left grateful that my own era and place has more fluidity, more possibility. 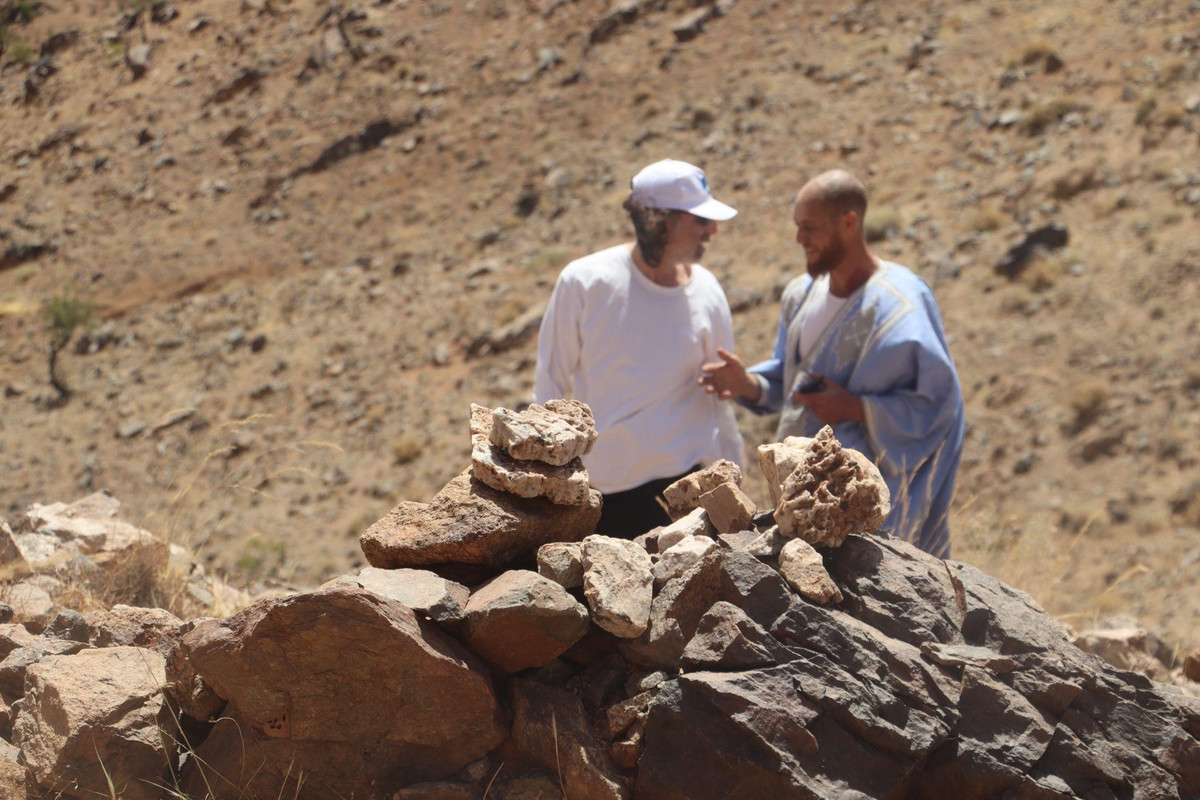 Yossef Ben-Meir and Tisfan community member Abdelhakim; at the burial site of the saint Shanoon in July 2021.
(Photo: Katie Bercegeay/HAF)

From Toubkal, at the height of the Taroudant Province, we descended into the Souss Region in the interior of this province, and visited Tisfan. There lies a Jewish cemetery seemingly forgotten by most of the local people, known only by some due to the upright stones that are found there. Off to the side of the cemetery is the burial of a revered saint named Shanoon, which many locals visit at its annual February pilgrimage without knowing that it is a resting place of a Moroccan Jewish person. The Moroccan people revere Moroccan Jewish saints and so, too, they do here in Tisfan. There is no caretaker. Rather, everyone—the whole of Tisfan—performs that role. In terms of reminding the younger people here of aspects of their own heritage, the elderly are replete with stories. Our help or even duty is to enable the gathering of the substantial, invaluable knowledge that is carried here. These elders will not live forever, but they are with us now and are so very willing to share if only asked. Let us inquire, listen, gather, and share before years pass and the bearers of the memories are not with us, and the overall remembrances fade.

Reflecting on these travels, I find that our time is short and our time is now. The Moroccan people want to dive endlessly into their culture and past and are completely receptive to those experiences informing a sustainable and genuinely prosperous future. Memories fade, but the loss is gradual, not sudden. Rather, it takes place over decades and generations, and, therefore, the opportunity to rectify and return is still here. In many places in Morocco, those decades and generations, more than enough but not too many, have passed. The opportunity is not endless because the fading is on its way, especially for the youth and especially in rural places.

Dr. Yossef Ben-Meir is President of the High Atlas Foundation and Chief of Party of the USAID Religious and Ethnic Minorities Activity (REMA) in Morocco.

by Noah C. Kohlmayer - HAF Volunteer On Tuesday, December 7, my two fellow Austrian volunteers and I had the opportunity to join Dr. Yossef Ben-Meir for the…