Can Carob save a Nation?

– CAN CAROB SAVE A NATION? The Policy Times, By Nora Martetschläger.

Benefits of Carob Now and Then and Its Potential for Sustainable Development in Morocco. 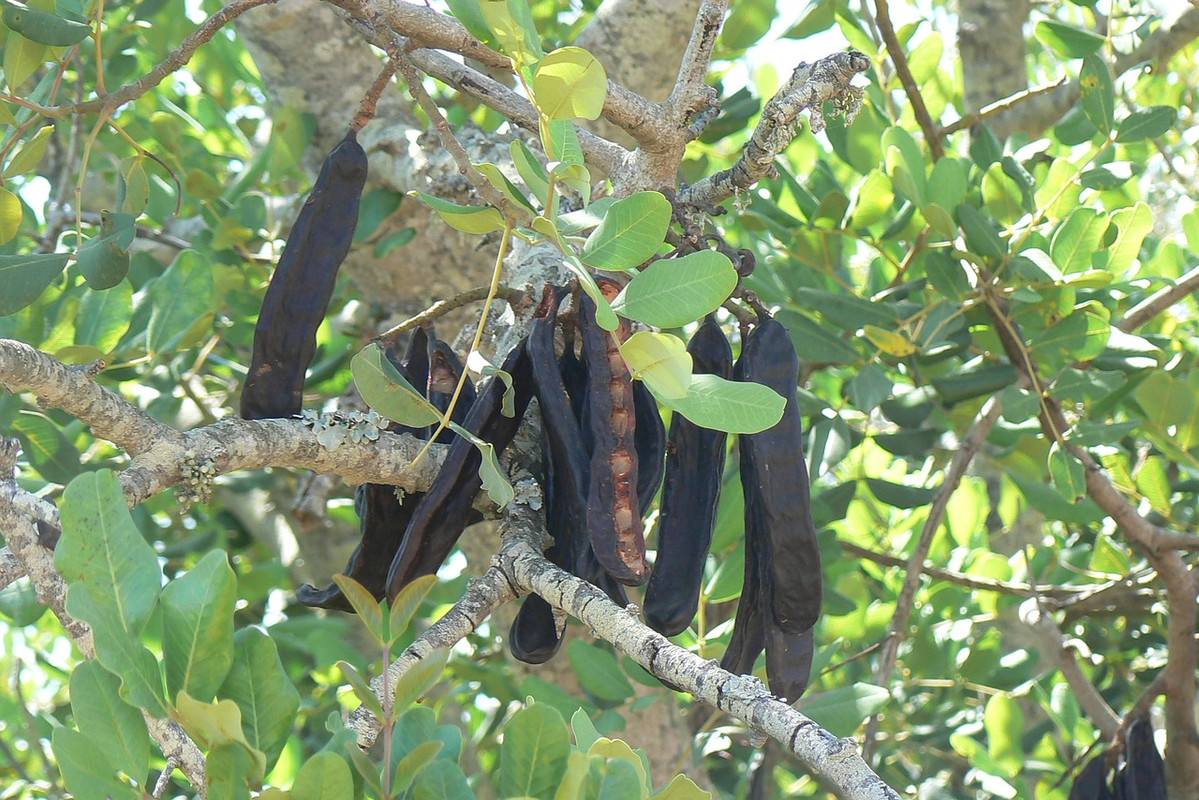 The carob tree has been appreciated for its various features throughout the ages. Nowadays, people are starting to rediscover this amazing plant. It is both a wild growing forest tree, and an easy to cultivate fruit tree. Because of this combination, the carob tree lends itself to a wide range of uses, thus making it the perfect tree to solve many of Morocco’s pressing economic and environmental issues.

But what is it that makes this plant so unique? To answer this question, we ought to take a look at the usage of carob across time and space.

Carob is native and widely spread in the arid and semi-arid Mediterranean regions. The fruit is known as locust bean or St. John’s Bread. This term goes back to St. John the Baptist and the notion that the “locusts and wild honey,” described in the Bible, upon which he subsisted while preaching in the desert, were wild carobs.

In ancient Rome, carob seeds were used as a form of measurement due to their stable weight, which led to a standardized method of determining the purity of metals such as gold. This is the reason why we still use the word “carat,” which evolved from the Greek word for carob, “kerátion.” Since one gold coin had the same weight as 24 carob seeds, 24 carats meant that an object was 100% pure gold.

Today, carob is utilized in a variety of food and technical products. It is available, for example, in the form of powder, chips, syrup, extract, or dietary pills. Another product is Locust Bean Gum (LBG), a binder or thickener in numerous food and non-food products. You can find carob in health stores or organic supermarkets as a dietary supplement or as a substitute for chocolate. By using carob instead of chocolate, calories and fat can be reduced significantly. Additionally, carob contains a large amount of calcium – about three times as much as milk. This makes it a great chocolate alternative for vegans, offering them the calcium intake needed for a healthy diet.

Yet another advantage is its high fiber content. Fiber helps us stay full longer after eating, deterring us from eating too much. It helps control blood sugar and has positive effects on cholesterol levels, making it particularly valuable for diabetics. For medicinal purposes, carob powder was used as a diarrhea remedy for generations. People who add it to their diet also report benefits such as weight loss and decreased stomach issues.

For centuries, carob held great importance as a natural and affordable source of sugar. Because of its high levels of calcium, fiber, and sugar as well as affordable price and availability, it was an important source of nutrition during times of war and famine. In countries like Cyprus, Malta, and Spain, countless people owed their lives to the nutritious carob pod during the Spanish Civil War, World War I, and World War II.

In Morocco’s future, too, carob can play an important role. The trees are perfectly suited for its climate and environmental conditions: relatively undemanding in care, they require little cultivation, tolerate poor soils, and are long-lived. Further, the trees grow even in difficult positions, such as sheer hillsides and sandy or arid soils. These features make them crucial in reforestation efforts of degraded areas.

National authorities seem to have recognized this potential. For example, the High Commission of Waters and Forests and the Fight against Desertification focuses increasingly on planting carob trees. As a forest tree, carob can be planted on Waters and Forests’ land, something which is not possible for other fruit tree species. If Moroccan authorities work hand-in-hand with communities and local NGOs, this opportunity has the potential to help the landless, who are the most vulnerable among the rural poor.

Morocco has continuously expanded its plantations in the past few years. In 2018, the country was ranked the world’s sixth-largest carob exporter – trading mostly raw fruits and seeds due to the country’s limited domestic processing capabilities. There is, thus, great potential here, but it must be used to maintain or improve the current market position.

Investing in carob appears to be the perfect opportunity for the Moroccan economy and environment. What makes the tree so attractive is not only its resistance against droughts, but also its ability to prevent erosion, soil degradation, and desertification, issues that are already present and for which finding a solution will only become more urgent in the future.

Carob can help alleviate poverty in rural areas by increasing revenue for farmers and future generations, while simultaneously fighting environmental degradation. In this sense, it is incredibly well suited for the needs of a changing Moroccan society in its pursuit of sustainable development.

Hajiba Boumasmar HAF Tree Monitoring Officer On Monday, 20 January, the High Atlas Foundation commemorated the annual day of tree planting when most of the members of the…