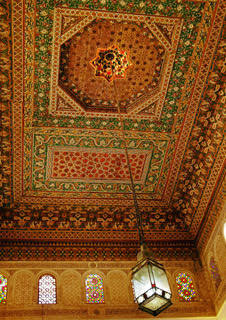 I first arrived in Morocco in December 2011 to serve in the US Peace Corps as a development volunteer. I lived in Agourai, a small town in the Middle Atlas Mountains until 2015, when I returned to the States to complete a master’s in humanitarian aid and conflict resolution. The nature of transitioning from the US to Morocco and, subsequently, vice versa a few years later accelerated the trajectory of my understanding of the gravity and longing for a community.

Pinpointing the specific summary and sentiment of my identity as an Iraqi American, both inward and outward, has never been straight forward. My years as a volunteer in Morocco served as both a catalyst and an indicator for my personal identity, embracing the cultural and ethnic reflections that bounce off a mirror held up to me. Years passed and I navigated my career throughout the African continent and Middle East, simultaneously and constantly reflecting on my love for the country of Morocco and its impact on my own personal narrative.

In 2013, the President and Co-Founder of the High Atlas Foundation (HAF) joined one of the Peace Corps’ conferences to talk to the group of volunteers about the organization and their work throughout Morocco. A former Peace Corps volunteer himself, Yossef Ben-Meir paraphrased a well-known quote, “Your time in Morocco as volunteers may often be described with the understanding that you are planting trees under whose shade you may never get the chance to sit under.” Coming from a former volunteer who had returned to Morocco and started an international non-governmental organization (INGO), the point stuck with me more than ever; development takes an immense amount of resources, and the work we sow into such labors requires time to take shape and stand independently. But time isn’t the only necessity, nor is it the most important. More so, it’s the community support that is most essential and that more often leads to our ability to sit under that sought-after shade.

I never anticipated that, eight years later, I would be in a phone meeting with Yossef discussing the multitudes of community, identity and ethnic validation in the context of my personal contribution to serving those principles. He shared with me a HAF proposal that was getting a lot of attention and had just been granted funding through USAID: The Religious and Ethnic Minorities Activity (REMA). The theory of change was compelling: If the fading collective Moroccan memory of Muslims, Jews, Christians, and diverse ethnicities living side by side is preserved, and REMA implements the initiatives with the people for cultural actions toward awareness and education, then the new transformational social solidarity aims to lead to improved livelihoods and an inspiring global example.

I soon learned that Yossef is an Iraqi Jew whose parents had fled Iraq before his birth in the US. After his Peace Corps service, the sense of community he had built in Morocco wasn’t one he could walk away from—HAF just the other day celebrated their 21st anniversary. For both of us Iraqi Americans, Morocco had become ingrained in our identities and given us a sense of community that often felt unattainable from the war-torn country of our ancestry.

I am once more based in Morocco, and I am now REMA’s Director of Advocacy and Engagement. I’m the daughter of an Iraqi Muslim and I am part of a team made up of Moroccans, Americans, Jews, Christians and Muslims. Our little community is vast, diverse, complex, and, ultimately, totally devoted to the country of Morocco. Community is an idea, an ideal, and an emblem whose depths of significance are infinite. Within that infiniteness, we each have a mosaic of history, culture and identity that evolves and grows if given the space. Ten years after I first moved to Morocco as a volunteer, I’m back after traveling and working all over the world. I’m as grateful as ever for the multitudes of community that Morocco adds to my own personal identity, and now—I’m closer than I previously could have imagined to sitting under the shade of those trees.

Prior to joining HAF, Jennan Al-Hamdouni worked throughout the Middle East and Africa in humanitarian access and negotiation for several years before returning to Morocco as the Director of Advocacy and Engagement for the USAID Religious and Ethnic Minorities Activity (REMA). Creating and Codifying the Right to Be Remembered