Big Delivery Taken to the Schools of Demnate

On Friday, February 28, a new international convoy made its way to Demnate: the Moroccan contingent of High Atlas Foundation staff members Imane and driver/photographer Mohammed; Asmaa, the executive assistant for Yves Rocher Morocco; Jingxin from China, a HAF Intern; and me from France, also an Intern. We were pleased to have Asmaa present to foster a potential tree-planting partnership between Yves Rocher Morocco and HAF. 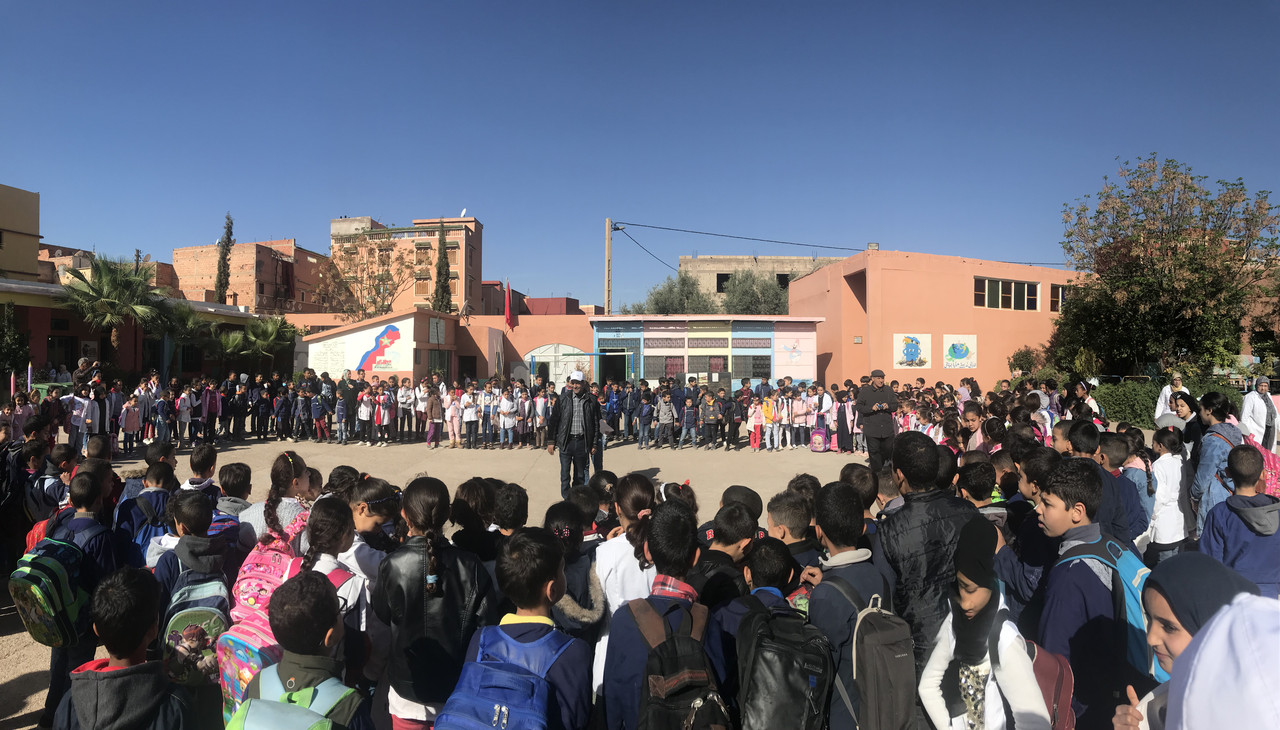 At the first school, the Hay Sonae, we met Jamie, an American Peace Corps Volunteer, posted for two years in Demnate. He teaches English, chess, basketball, and yoga at several schools and high schools in the city. Mr. Chaouki and AESVT (Association des Enseignants de Sciences de la Vie et de la Terre) members were also present. Two hundred and fifty primary school pupils formed a circle around Imane, who started the workshop with an “icebreaker” game. She asked questions about the environment, surrounded by this horde of children. The first tree was planted, and we left about fifteen more saplings for the school to continue planting during the day. Before we left, we were treated to a surprise that the school had prepared for us: the school choir of about twenty students performed two beautiful songs, one in Arabic and one in French. After this little show, we were offered mint tea and cakes to celebrate Green Week.

We had quite an ambitious schedule for the day, visiting four schools! We continued with the school of Mimouna, where 48 boys and 42 girls were waiting for us. Imane started the workshop with more than motivated students. I noticed with joy that the girls, like the boys, participated vocally. Jingxin was the star of a small group of girls who followed her wherever she went. These little fans were soon around the three of us (Asmaa, Jingxin and me), Asmaa speaking to them in Arabic. The girls asked questions about us: our first name, where we come from, and so on. After the trees were planted, the teachers and administrative staff invited us to drink mint tea and offered us little cakes. As at the previous school, the AESVT was also thankfully present. The message: let’s plant! 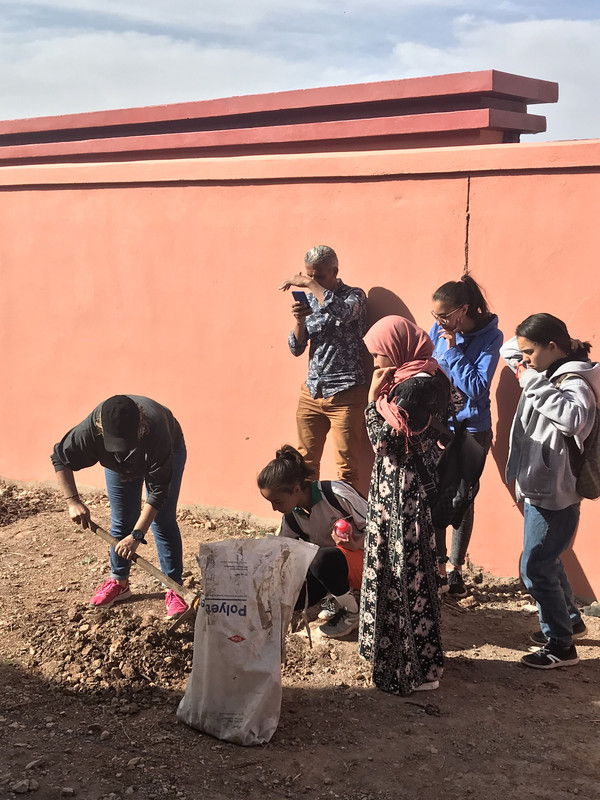 We had two hours of break before starting the afternoon with a new school. Jamie, who knows the sector because he explored it for a year and a half, took us to a pretty nice place: Iminifri. While waiting for our tagine, we went down to the Iminifri cave. With only a short walk, we arrived near a small stream, where we enjoyed the pleasant view and the fresh air before going back up. Above our heads danced many red-billed chough birds that seem to live in this area.

After eating our tagine, it was onward to the Youssef Ibn Tachfin high school that welcomed us. This is the first Moroccan high school I have been to. I was curious to see pupils close to my age, to see their involvement, their participation, and to compare them with what I had already experienced at the primary and middle schools. Everything was going well and all the teenagers (36 girls and 20 boys) were involved until, unfortunately, the majority had to leave the workshop for computer classes. However, Imane finished the workshop with the remaining fifteen students, and we planted the tree together. Once it was in the ground, each person watered it by dipping their hands in the bucket of water: we took turns blessing the future tree.

To conclude this day of workshops, the dormitories of Dar Taliba (for girls) and Dar Talib (for boys) received us. Twenty-one girls and thirteen boys, all high school students, formed a circle. As with the other three schools, Imane got them to participate, and the group applauded each good answer that was given. One tree was planted, and fifteen were left to be planted by the students afterwards. We were again invited to drink tea and eat a snack with the members of the AESVT.

We gave the rest of the trees to Jamie and dropped off him and the plants at the environmental center of Demnate. With our day thus ended, we took the road back to Marrakech. 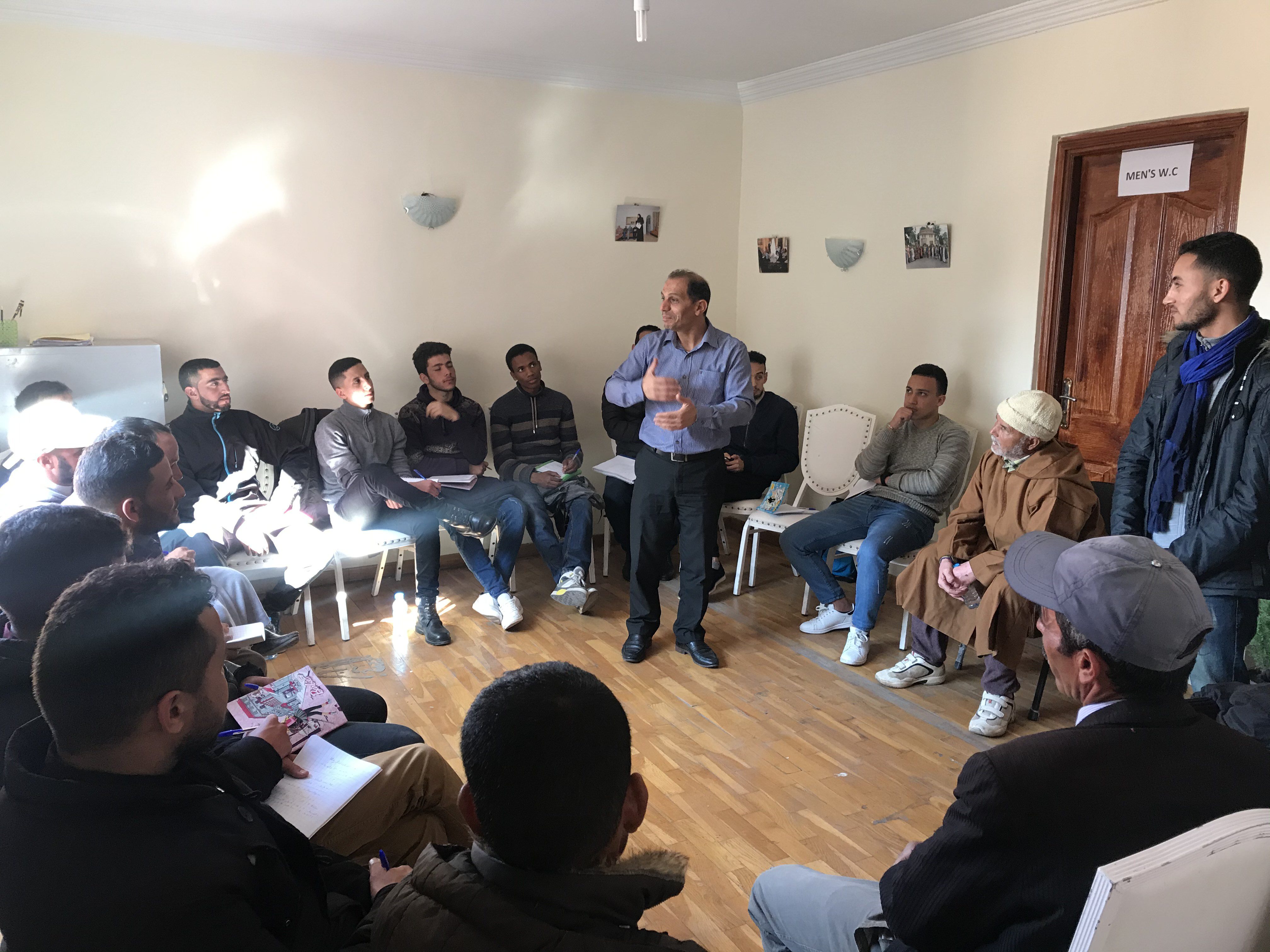 From February 20th to the 23rd, the High Atlas Foundation conducted a training of trainers with 30 men, 23 of whom came from 4 cooperatives targeted by the…