An Illuminating Farmer-to-Farmer Story in Morocco 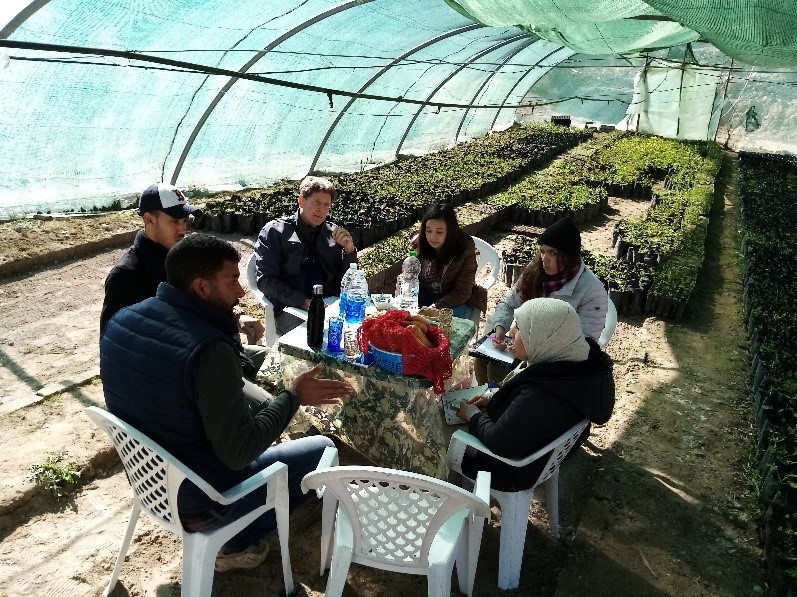 Bill Nichols served as a volunteer consultant to the High Atlas Foundation (HAF) through the Farmer-to-Farmer Program (F2F) for two weeks in January 2020. Originally from New Mexico, now residing in Boston, Bill collaborated as an F2F volunteer with four of HAF’s tree nursery cooperatives in southern Morocco. He was tasked with improving their productivity. One immediate benefit of his visits with Moroccan farmers at these sites is that he was able to share not only his technical and business skills but also to find ways for the four individual cooperatives within the same province to share their own specialized skills with one another.

Farmer-to-Farmer responds to the local needs of host-country farmers and organizations like HAF in developing and transitional countries. It leverages the expertise of volunteers from U.S. farms, universities, cooperatives, agribusinesses, and nonprofits. As an example, during Bill’s visits, he offered guidance to sustainably maximize the quality and quantity of organic fruit trees. This directly coincided with the goals of HAF, the current F2F-implementer in Morocco, to develop project plans with donor partners that local communities determine and manage.

Bill’s assignment was fortuitously timely, as it was during Morocco’s planting season, when partners are driven to plant as much and as well as possible. Early in the season, cooperative members consider the number of seedlings to plant along with the expected returns from their plantings. In response to this need, Bill supported them in their cost-benefit analysis that, along with a reevaluation of tree pricing, informed the nurseries’ operational budgets.

Bill’s work on pricing trees was immediately utilized by the cooperatives in order for them to meet the rigorous project criteria of their donor organization, Ecosia (a German search engine that finances reforestation around the world). As a result, Ecosia now supports planting 150,000 seeds of almond, carob, olive, and walnut trees at the nurseries of the four cooperatives where Bill provided assessments: Tassa Ouirgane, Imdoukal Znaga, Akrich Village, and the Adrar Cooperative. At the latter, he also instigated a soil analysis for the nursery caretaker, who complained of substandard planting soil.

The groups he worked with acted upon Bill’s observation and coordinated capacity-building workshops. For example, the members of the Women’s Cooperative of Tassa Ouirgane, since Bill’s work with HAF, have participated in monthly technical trainings facilitated by Hassan, a father of two in his thirties who is the caretaker of a nearby nursery cooperative. Bill had met Hassan when they identified a more efficient water delivery system for Imdoukal Znaga Nursery. That collaboration led to the identification of system material needs and related costs. The local F2F-HAF team communicated this information to FENELEC, a federation of Moroccan companies, who then funded the solar pumping components and training needed for the improved the water system.

These lasting outcomes are deeply relevant to worldwide F2F programming today. The current global pandemic makes it extremely difficult, even impossible, to field volunteers on F2F assignments. Until the pandemic lifts, needy host-country organizations will not receive assistance from foreign volunteers. It is profoundly helpful for emerging agricultural cooperatives in all thirty-five of the United States Agency for International Development’s F2F-country programs to have enabled local experts like Hassan to complete new F2F assignments, while connected with experts in the U.S. Bill’s connection-making has benefited several cooperatives in this way, illuminating its necessity in our new global reality.

That F2F Volunteers excel in Morocco and around the world speaks to their being exceptional people. A testament to this is not only Bill’s diverse and vast knowledge-base (technical, financial, and managerial), but also his wholehearted generosity. However, it must be said that volunteers also require a conducive context that enables the potential of their work to be achieved. Through essential participatory dialogue, cooperative members are able to attain consensus on their goals and are ready to act on the agricultural project plans that they have themselves created well before F2F volunteers arrive in country. By laying groundwork in advance, HAF can ensure that the volunteers’ recommendations are directed toward what is most needed and wanted. In truth, cooperatives more often consider recommendations and accomplish their objectives with new partnerships that are contributive – in both directions – as was the case with Bill’s successful assignment, assisting Moroccan people to advance transformative initiatives.

Since it began in 1985, the John Ogonowski and Doug Bereuter Farmer-to-Farmer Program of USAID has supported volunteers from all 50 states in their completion of over 15,000 assignments in more than 115 countries. It is an honor for the High Atlas Foundation to implement this program in Morocco, and this program is made even more meaningful as HAF was founded by former Peace Corps Volunteers. Bill’s good effects are rippling onward. Upon their reflection we can see that the global positives of F2F – and of Peace Corps fielding more than 235,000 volunteers since 1962 – are incalculable.

Dr. Yossef Ben-Meir is president of the High Atlas Foundation and a sociologist.

As the High Atlas Foundation continues in its mission to contribute to the development of people while preserving the life of our planet by planting trees, a new…

The argan oil industry’s impact on rural empowerment is growing nationwide, in part, because of international demand on women's cosmetics and pharmaceuticals. The National Initiative for Human Development (INDH)…