It was a pleasure meeting new people from different cultures and religions during Friday’s event.

Firstly, I did not have an idea what I would learn until I discovered that the event’s larger purpose was to encourage cooperation between two religious peoples, Jewish and Muslims. I was very appreciative of this goal.

Our trip started traveling from the High Atlas office in Marrakech to Tameslouht. We arrived there and then started by meeting with a mixed group of Moroccans and Israelis.

As usual, we did our introductory presentation, “names, ages, what we all do for a living…”, and then we conducted a workshop where each group would write about their idea of the other’s religion, both before and after.

For my group’s idea, we decided to draw a tree expressing the purity of a human being when they are born and then we wrote words that explain what social media and illiterate people said when we were younger. We then drew a leaf inside the tree and wrote words that describe our relationship now and expressed our feelings. 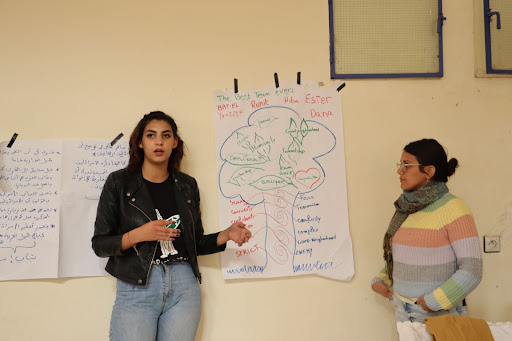 During this workshop, we discussed and clarified many of the wrong ideas and stereotypes about Jewish and Muslim people, which made us feel that we are more than friends but mostly like sisters and brothers and that in the end, all religion is humanity.

I want to thank Batel, Ronit, Ester, and Youssef for being my team partners and helpers, and a big thanks to the High Atlas Foundation, especially Dr. Yossef Ben-Meir, for these unforgettable efforts to cooperate with our friends”. Jamal Maghiouzi, Dakira Cultural Coordinator Early in March, I had the opportunity to co-lead, alongside Youssef Tahiri from HAF’s tree team, cultural, environmental, and social activities for the…