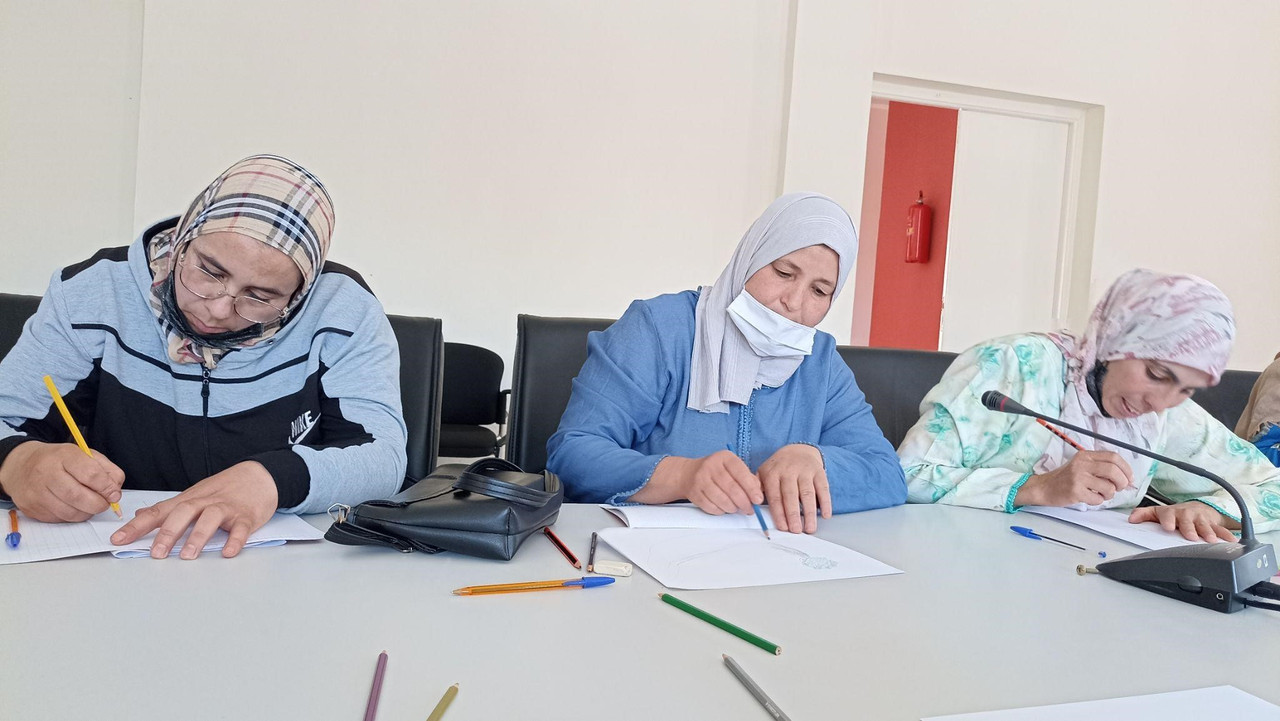 The local authorities granted the cooperative president’s request to use the sociocultural center for the workshop, guaranteeing that the women felt comfortable and the activities were done in a familiar environment. Ice-breaking activities, such as sharing experiences, writing down obstacles and fears, and standing up to introduce priorities, prompted the women to quickly start interacting with the facilitators.

The women of Zaouiat Cheikh commune actively shared many thoughts and ideas, giving the HAF team a clear vision of the women’s daily lives.

Their low income has motivated them to find a job and become independent. The majority of them have hobbies and skills either in the artisanal field or the agricultural one, such as making carpets and making food from grains. As they mentioned, those skills come from one generation to another, with every mother teaching her daughters before they get married. That’s why women are able to make carpets, Moroccan cookies and sweets, and dye carpets using natural products, like pomegranate peels and henna.

The IMAGINE workshop was such a healing therapy for many women. They felt free in expressing themselves. They laughed at some funny memories. But, tears were some women’s way to forget the painful memory of unwanted early marriage. Some of them are single and take responsibility for their families, but they expressed that at times they grow tired of being pitied by society for their circumstances.

Affirmations are a way to give women the chance to change negative ideas or habits. For example,  Rafika talked about organizing the timing of her prayers. The workshop’s facilitators and the attendees gave her a lot of advice, enabling her to learn how to make prayers a priority. “ From now on, prayers will be my first important daily duties. I won’t postpone them again,” she said.

According to the women, they had never been asked about their feelings and thoughts. Their main duty has been following rules and obeying orders, particularly from males. They feel that they are considered as weaker members of society, so they want to speak up and affirm their value while removing one another’s fears.

The IMAGINE workshop builds trust between the participants and helps them abandon their old fears and scars by giving them time and space to express themselves. They started interacting with each other by sharing their feelings, thoughts and even personal problems.

On the last day, women were proud to receive their certificates of participation. For some of them, to receive a certificate was a dream that they thought would never be achieved. They showed their gratitude through their tears.

The women all agreed that to find a job and become independent requires education. Now, they are ready to start their literacy classes.

By Fatima Zahrae Lahlou As a student at the National School of Commerce and Management, I volunteered in an empowerment workshop under the supervision of the High Atlas…