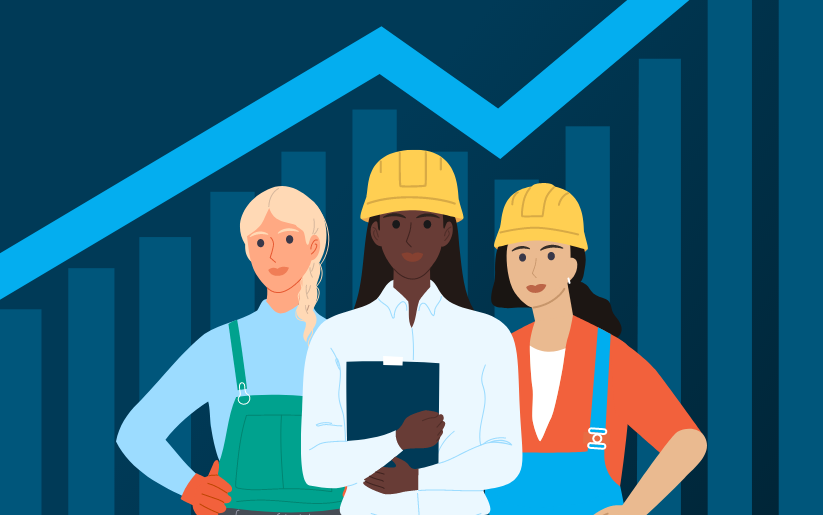 As a psychotherapist, I have heard many stories from a diverse group of both men and women.  An ongoing challenge for women in the United States is trying to work in areas that have historically been dominated by men. Breaking through this system is challenging and significant changes have occurred across industries, but much change is still needed.

One example of this is a woman whose parents are Lebanese immigrants. She was raised in California and was given opportunities to attend high quality universities as her father had assets which he brought from Lebanon. She is a bright woman with a facility for mathematics.  She could have chosen a variety of possible professions which are easily accessible to professional women. Instead, she chose to become a project manager in the construction industry. The construction industry, as one might imagine, is a very male dominated domain.

She understood the potential risks of this choice but decided to follow her passion and pursue this career choice. What are some of the beliefs she held that might have given her the strength to continue?

Some of her attitudes in pursuing this career have included (1) She is as smart or smarter than the men she works with, (2) By being clear, direct, and understanding she will gain the respect of her coworkers and underlings, and (3) She will always try to be fair and abide by a guiding principle that puts the quality of her work above any political issues or gender biases that exist.

Her journey has been a challenging one. At the time I first met her she was already a seasoned professional who had worked for at least five different firms in the large San Francisco building market.

What challenges did she encounter? First, imagine what a 5-ft tall Lebanese woman would encounter in a “macho” work environment. She faced the typical obstacles and questions, such as “how can you get men to follow your directions as you are not a ‘domineering presence’?”, “how can a woman understand the challenges of working in construction without actually being able to do it herself?”, and perhaps most importantly, the question of whether or not she deserves to be paid the same as a man in the same job.

So, how did she succeed and to what extent? There seems to be a very simple concept which professional women in the American labor market have either adopted or, some might say, comes very naturally to them: they work very hard!

Part of the reason that she came to see me was to help her manage her stress. She was typically working 50-60 hours a week when the normal work week is considered 40 hours. She would stay late and work on weekends in order to be sure that she was “doing a good job”. This meant that she would always try to do enough to be sure that no one could question whether or not she had addressed any potential issues. As one can imagine, there was a certain lack of clarity in her mission as construction is a fluid process. This left her perpetually wondering whether she had “done enough.”

Now, working so hard had a few consequences: first, she suffered from stress-related physical problems, including chronic back pain, and nervousness; moreover, excessive attention to work left insufficient time for her personal life.

The professional consequences were also significant, ongoing promotion and compensation. This process, however, was not a direct line. Companies would delay promotions and delay compensation while promoting male counterparts often due to nepotism or the “old boy network” of who-knew-who.  Such practices then resulted in her needing to change companies. To realize that her work challenges resulted in her needing to change companies in order to seek continued advancement is an important point that must be recognized.

As a woman, and therefore a minority in her industry, she was often treated with some disrespect as a professional. However, she loves what she does and is very good at her job.  She had ongoing frustration with the sexism that was both personal and professional, but she learned over time that by trying to take control of her career and being proactive in seeking opportunities, she was able to continue to advance. She has been successful but, according to her, both her title and income should have been greater much earlier in her career.

Over time there have been more women who have entered this business environment, and it has gotten somewhat easier. In fact, I believe that over the last 10-15 years (not a short time) there has been a shift in American culture so there is now a greater emphasis on equal opportunity for women and minorities.

The woman I speak of has developed a reputation in her industry, which in the localized area consists of only a small group of large employers, as a diligent worker and creative problem solver. The other part of her reputation describes her as aggressive and mean. There are some who would use a pejorative term to describe her.

These kinds of challenges women face in the workplace highlight and raise the ongoing problem of how women can act vs. how men are allowed to act.

This story also demonstrates that change is happening and the future for women in the workplace is very hopeful for women at all levels.

My Daughter: The Woman I Most Admire

By Ellen Hernandez, HAF Writer/Editor In anticipation of International Women’s Day, I have thought about the women I admire. Of course, there are the famous figures in history… Preceding Mourchidat and Participation with Empowerment

by Yossef Ben-Meir and Fatima Zahra Laaribi In Morocco, the mourchidat program that trains women in Islamic theology to equip them to deliver the religious-based human service functions as done…