A Vision for the Future: Tiznit’s Agricultural and Spiritual Cultivation 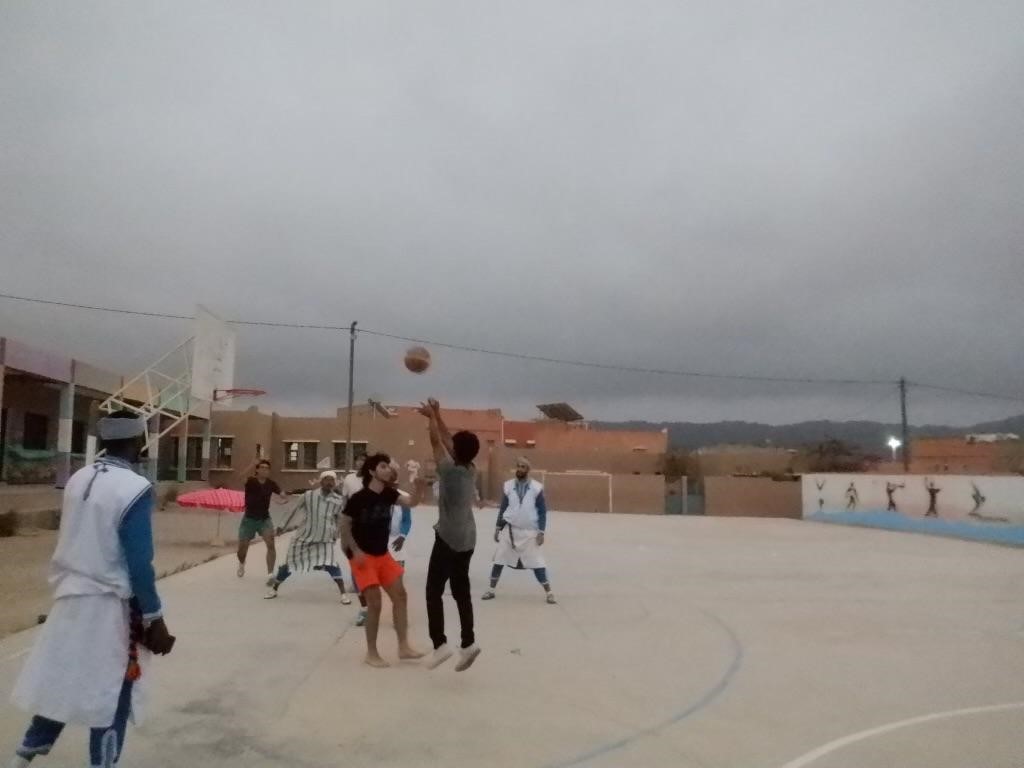 The road to Tiznit from Marrakech runs through the mountains, a landscape that floats and rises and arcs like the mezzanines and cantilevers and walkways of what could only be a heavenly architecture. Over the red and rocky landscape, the mountains truly seemed to be the spires of fairy-tale castles, and as we progressed, the world changed from furnace-blasted plains, to mountains, to fog, and then to the coast, where the Atlas flings itself into the Atlantic.

After a five-hour bus ride across this landscape, I stepped into Tiznit hoping to explore the town, but I was forced to pause. It was quiet. Compared to Marrakech, it felt like all the pent-up energy and commotion and chaos of everyone all along the Eurasian landmass had exploded in a stampede of wild horses across the Atlas and came here to descend into the water. Maybe it was just my relief from getting off the long drive from Marrakech, but Tiznit felt harbored from all the insanity of the world.

The Vice President of Tiznit invited the HAF team to a conference with the city government, including the head of the ministry of culture and the head of the ministry of farming. These officials were proud of their town, and the cultivated atmosphere of tranquility, and they were happy to talk with us about Tiznit. We discussed the importance of culture, agriculture, and sports to their vision of development in town and throughout the countryside.

Through culture, they hoped to identify, improve, and advocate for important sites around the area, such as Jewish and Amazigh shrines that may have been forgotten over time. Through agriculture, they hoped to expand production of commodity crops like argan, which grows best in the Sous-Massa region. But I was confused by what sports could bring to this vision. It often seems that sports can be confused with big arenas and drunk fans and riots, all consumed in big commotion and craziness that is certainly antithetical to Tiznit, and would probably belong better in Marrakech. What place would sports have here?

Then we went an hour into the country to visit a middle school. There was a big dance from skilled Imazighen professionals. There were presentations on local culture, especially focusing on music and argan. The students had spent a lot of time studying the ecological practices that benefit argan production — a big industry in the region, and a bigger point of pride for many of the people. There were presentations that detailed every step undergone in creating argan oil, workshops on uses for argan, and even a play about protecting argan trees.

I was impressed by the enthusiasm shared by the students and faculty for sharing their knowledge about the argan tree, as well as the depth of knowledge covered in middle school classes about the local ecosystem. In the United States, I learned nothing in class about the environment around me, while subjects like history and state politics were endlessly drilled every day. Although history and politics are important, I think it is important for schools to instill knowledge and respect for our environments, especially as climate change presents looming challenges to the stability of landscapes everywhere.

After the presentations, we had dinner with the kids and were shown around the campus. Pretty soon, my friends and I found a basketball court with a couple of balls nearby. We asked if we could shoot around, and the Amazigh-language teacher was happy to allow us. While getting used to the different rims, the professional dancers who had originally greeted us at the school entrance came up and asked if we wanted to play. Of the HAF interns, we were four, and of the dancers, they were four — good numbers for a full court game. Soon, we were running back-and-forth across the middle school court, the dancers moving light on their feet to get open and shoot, while the HAF interns used quick passing to try and open up lanes for flashy dunks on the short hoops.

As the sun began to set out on the west coast just beyond the school, we eight people from all around the world had been brought together by an urge that may have been more powerful than even music or food. And as we exchanged phone numbers to stay in contact throughout our time in Morocco, I think I realized why the government of Tiznit found sports to be just as important as culture and farming for the city. Something about a good game can bring together myriad people, even where language might fail.

by Zoe Costello, HAF-UVA student intern How can you sum up a topic as broad as gender or race in 15 minutes? Is it possible to have such…