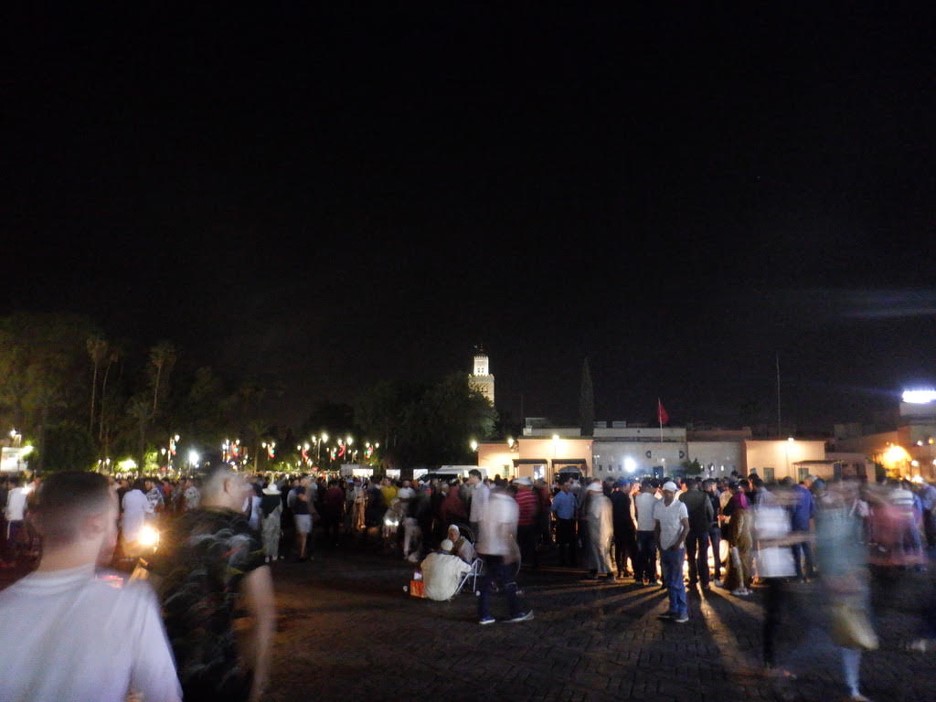 One of the most iconic sites of Marrakech is the medina, where the bustle and excitement of thousands of tourists and locals is prevalent daily. Rows upon rows of souks line curving alleys with merchants who sell pottery, silver rings adorned with large gems and fresh fruit juice. The Jamaa el-Fnaa Square epitomizes the hectic energy of the medina; snake charmers, street performers, sunglass sellers and fruit stands sell products straight from the sidewalk.

The relationship between the informal sector and development is complex. On one hand, it can promote development by reducing unemployment and promoting local economies. Many informal workers lack access to formal work due to migrant status or a lack of education and skills. However, the informal sector is marked with instability. Workers are excluded from social security systems such as healthcare, retirement, and insurance. Work conditions are also not monitored, and many workers are subjected to unsafe working conditions, work long hours, and are paid less than minimum wage. Poverty rates are higher among informal workers; a study on informal work in developing countries found that increased participation in the informal economy is positively correlated with rising poverty rates. Informal workers lack the ability to properly advocate for themselves. 85.6% of informal workers were not members of a professional union as of 2014, and unions find it difficult to organize informal workers. On a greater scale, the informal economy costs the state an estimated 34 billion dirhams in annual tax dollars lost.

Increased participation in the informal sector is believed to be correlated with Morocco’s rapid urbanization. From 2010 to 2020, Morocco’s urban population increased from 58% to 63.3%. However, the formal sector cannot absorb all the added labor force in the market, particularly considering many migrants come from rural areas and may lack the proper education and skills for formal jobs. This leads individuals to seek employment in the informal sector.

The large participation in the informal sector and the lack of financial stability it provides for many workers leads to further consequences and is correlated with residence in informal housing. Informal housing is also referred to as ‘shantytowns,’ and are cheaply and often illegally built communities on the outskirts of cities. Shantytowns attract individuals living in poverty with low living costs, and are often the first stopping point for rural migrants. Shantytowns have strong communities on which individuals can rely on one another, and vibrant cultures. However, they can also be overcrowded and lack access to basic infrastructure such as sanitation, transportation and schools.

The government has taken efforts to address issues caused by the informal sector. The Villes Sans Bidonvilles Programme (2004) aimed to eliminate all shantytowns and rehome residents. As of 2022, the program eliminated 59 out of 85 documented shantytowns. However, many individuals were dissatisfied after being relocated as they lost their social networks and proximity to cities. King Mohamed 6th additionally issued instructions to organize, formalize, and supervise street vending activities. Policies included creating a census of street vendors, creating work schedules, and relocating markets to reduce street traffic. However, many street vendors were excluded from the rehabilitation process, and many of the market relocations were in outskirts of the city, reducing the number of customers.

The failure to engage communities in policymaking lead to a failure of both policies to improve the livelihood of informal workers to their maximum extent. It is pertinent to consider the desires and opinions of informal workers and those residing in shantytowns before deciding further policy. As Morocco continues to decentralize, it is likely that future policies will be executed increasingly at the local level. While demands will vary from different localities, overarching demands include simplifying procedures to be included in the formal sector, increased technical training, access to social systems, and increased security. The informal sector must be taken into consideration when implementing social policies, or such programs may fail to help the people that would benefit greatly from them.

Zoe Costello is a 4th year at the University of Virginia, and an intern at the High Atlas Foundation in Morocco.

By Ryan Winegardner, UVa/HAF student-intern The community members and the HAF team unloading and organizing the tree saplings (credit: Ryan Winegardner) There is a great horror and a…