A Cup of Tea with the Taste of Identity 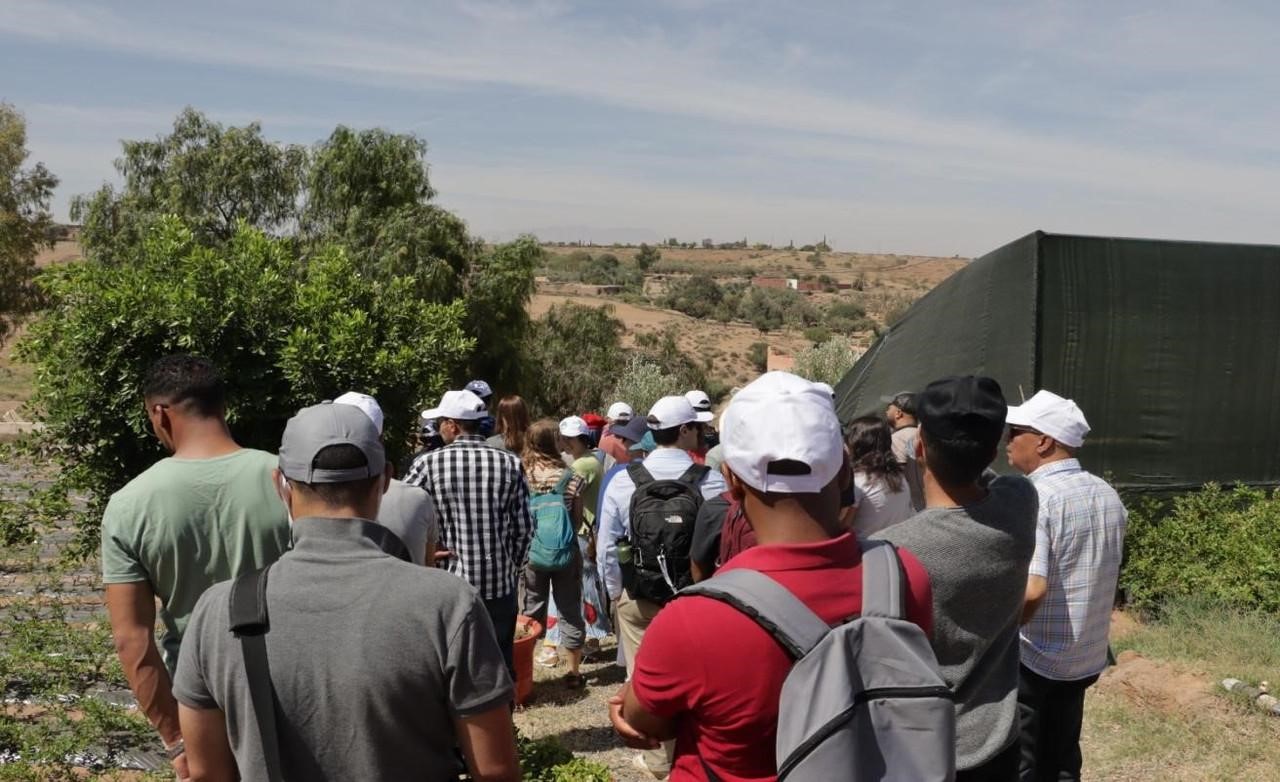 Memories from our lives come to us on the strings of new experiences, some of which let us indulge in reminiscences and relive the magic of past moments again.

I went through this experience with the team of the High Atlas Foundation, which organized a new (at least for me) exploratory trip, whose destination was on the outskirts of the “Red City,” Marrakech, on the road leading to the village, Tameslouht.

The journey started at dawn at the High Atlas Foundation office. Everyone was full of curiosity and eagerness to experience something new. The road we followed was surrounded by plains and plateaus and led to an area called Akrich. I sat on my own, my eyes contemplating the landscape and my pen capturing the memories on paper. After a few twists and turns of the road, we arrived in Akrich.

We were presented with a breathtaking view: a wide open field and a beautiful blue sky covered by light fog. The group of American students that accompanied us started taking pictures to capture the impressive sight.

The President of the High Atlas Foundation, Dr. Yossef Ben Meir, opened the event with welcoming words. He continued to talk about the rich history of the place, which accommodates a beautiful tree nursery that is supported and managed by the High Atlas Foundation. It is one of several nurseries all over the Kingdom of Morocco, all contributing to the reversal of climate change. However, the nursery in Akrich is unique: it is built on the same land as a Jewish shrine and cemetery. This feature embraces the heritage of this region, which was once inhabited by Moroccan Jewish communities.

The caretaker of the nursery added to Dr. Yossef’s speech by telling the story of the cemetery and how the nursery was built here. He had many stories about his ancestors who had lived here and had close relationships with the Jewish community. They had looked after the place and made sure that it remained in good condition after the departure of the Jewish people.

Little by little, we continued to descend the hillside steps toward the tomb. After each step, we saw more graves with engraved writings in Hebrew on each side of the walkway. We continued our tour of the nursery until we reached the bottom of the steps. There, in a small building with walls filled with pictures of Jewish people, the shrine is located. Even though I saw them for the first time, the people portrayed in the photographs played an essential role in the history of the community.

People of all different kinds of backgrounds, cultures, and religions had gathered in this room to celebrate the multi-religious cooperation which enabled the creation of the nursery in the first place.

An exciting conversation started with people asking each other questions, exchanging stories, and linking everything to this site, showing how all the different cultures and religions are connected with each other. The discussion was enriching and opened up new perspectives and dimensions. 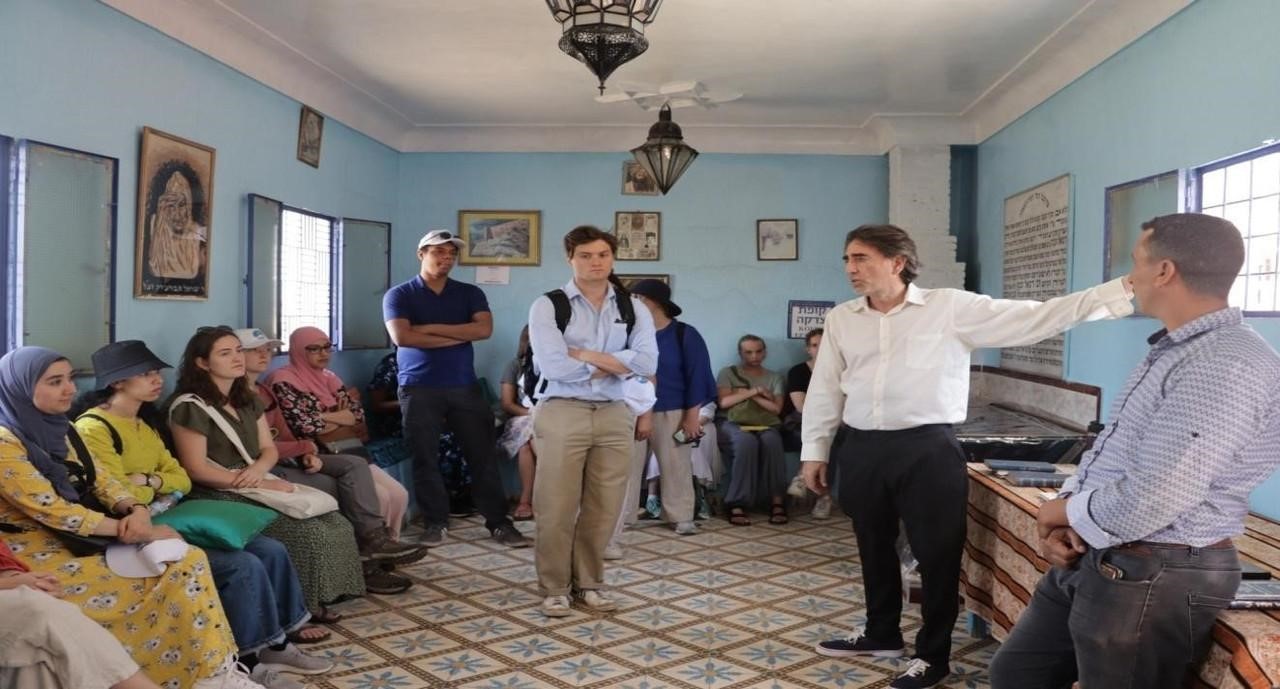 Leaving the shrine, we left the region’s past behind and returned to the present to enjoy a special tea session with friends. We called it “having a cup of identity” because the tea was accompanied by a fundamental question, which was, “What does identity mean to you personally?” The question was the perfect opportunity for those in attendance — with different backgrounds — to get to know each other better.

We split into small groups and exchanged our stories, experiences, and opinions. A pen and a piece of paper were given to each group, which was tasked with drawing what identity meant to them. The paper was then supposed to tell a story, and the cup of tea was supposed to listen to it.

After some lively discussion, every group agreed on the meaning, and the different groups shared their findings. History and origin, religion and homeland, culture and ethnicity – many topics were covered, and everyone got the opportunity to share their experiences and stories that carved their personal “identity.” Every paper had different shapes and drawings. Each group had something new to add and an untold story to reveal.

This is the first time I have seen something like this. All of this was possible through this unique, intercultural dialogue and nothing that could be found in a book. 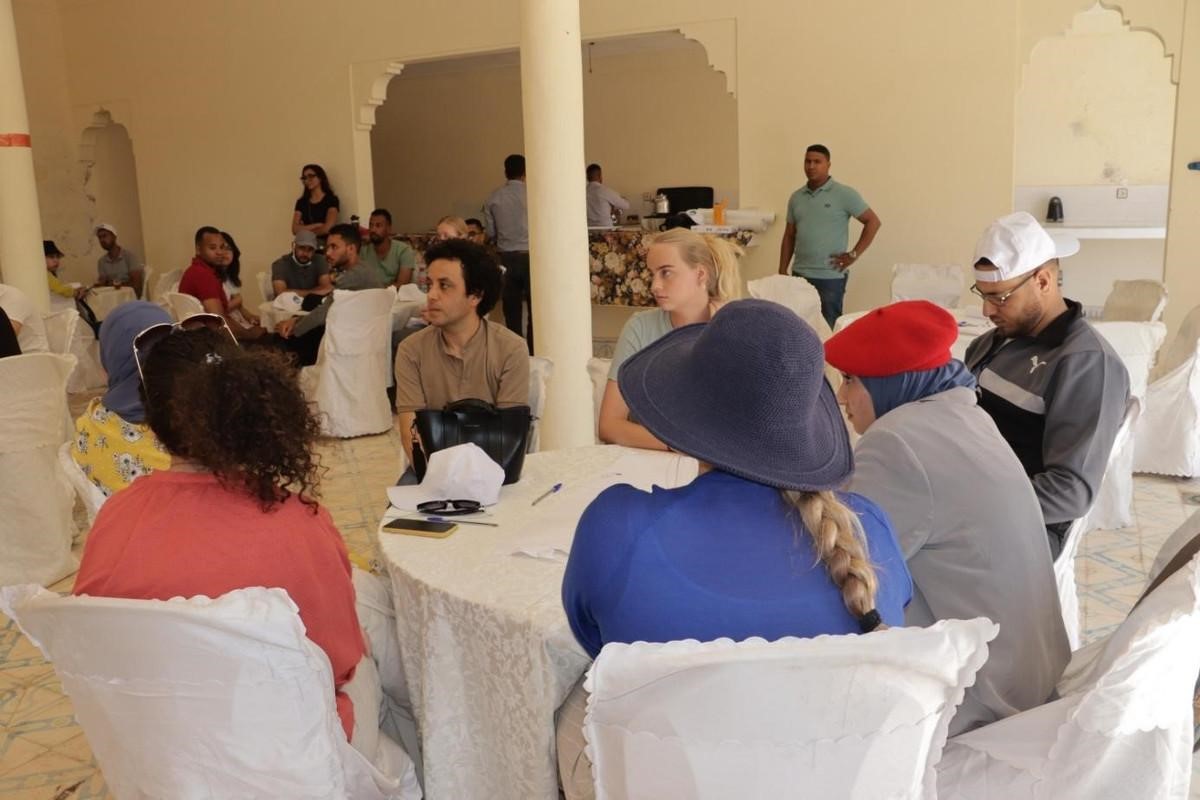 Afterward, we visited the site of a women’s cooperative in the village of Achbarou. The women there were weaving rugs using traditional methods. It was as if they were painting a picture, but they used their hands instead of a brush, and woolen threads instead of colors. I was amazed by the creativity and skills of these women. They had revived this heritage and infused it with new skills and professionalism. We had the opportunity to buy some of the cooperative’s products, and I came across identity again. The products were souvenirs that would remind us of this trip and our attempts to define this word. Every product was unique in color, shape, or size, and it dawned on me that there was no universal definition for it.

We had set out to find a universal meaning of identity, which we were unable to do, but on our way there, everyone confronted their own personal identity, which was the real aim of all the discussions. In the woven paintings, the creativity and imagination of the women are what make the paintings unique and special. They are an advantage and something to be proud of. In the same way, our differences are what truly make us unique and special. 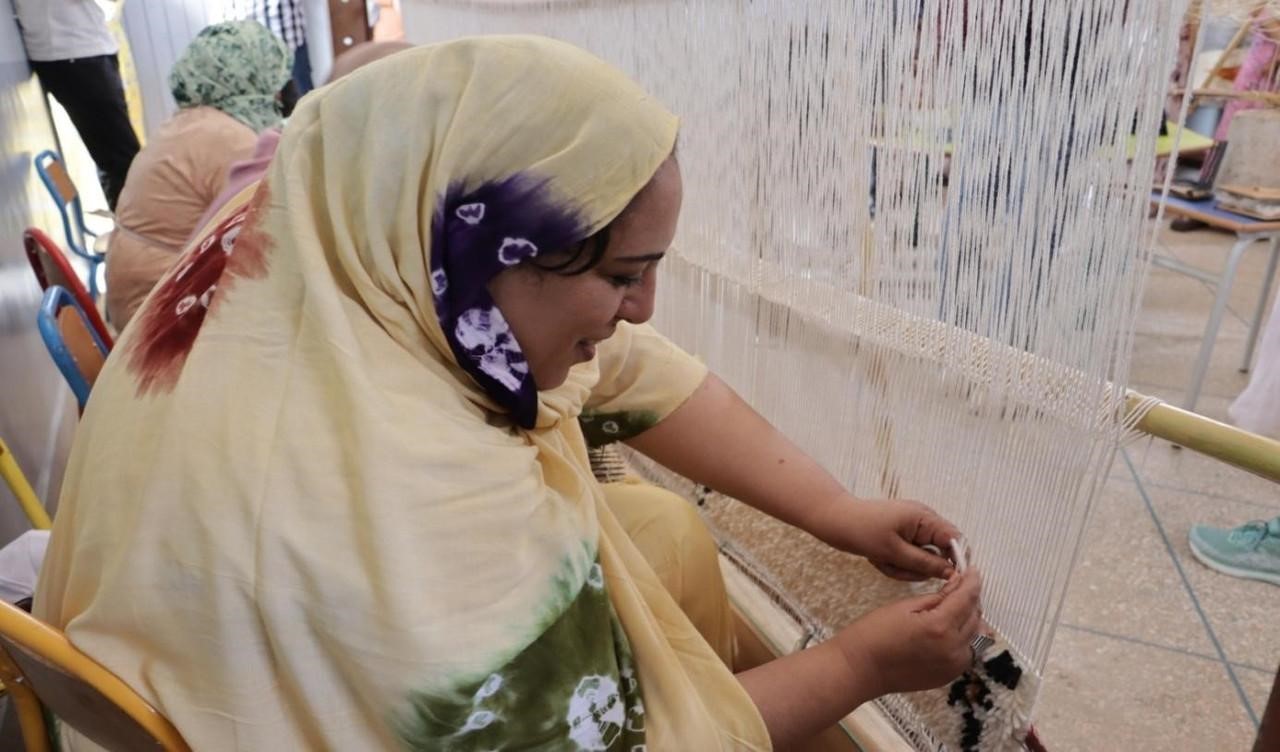 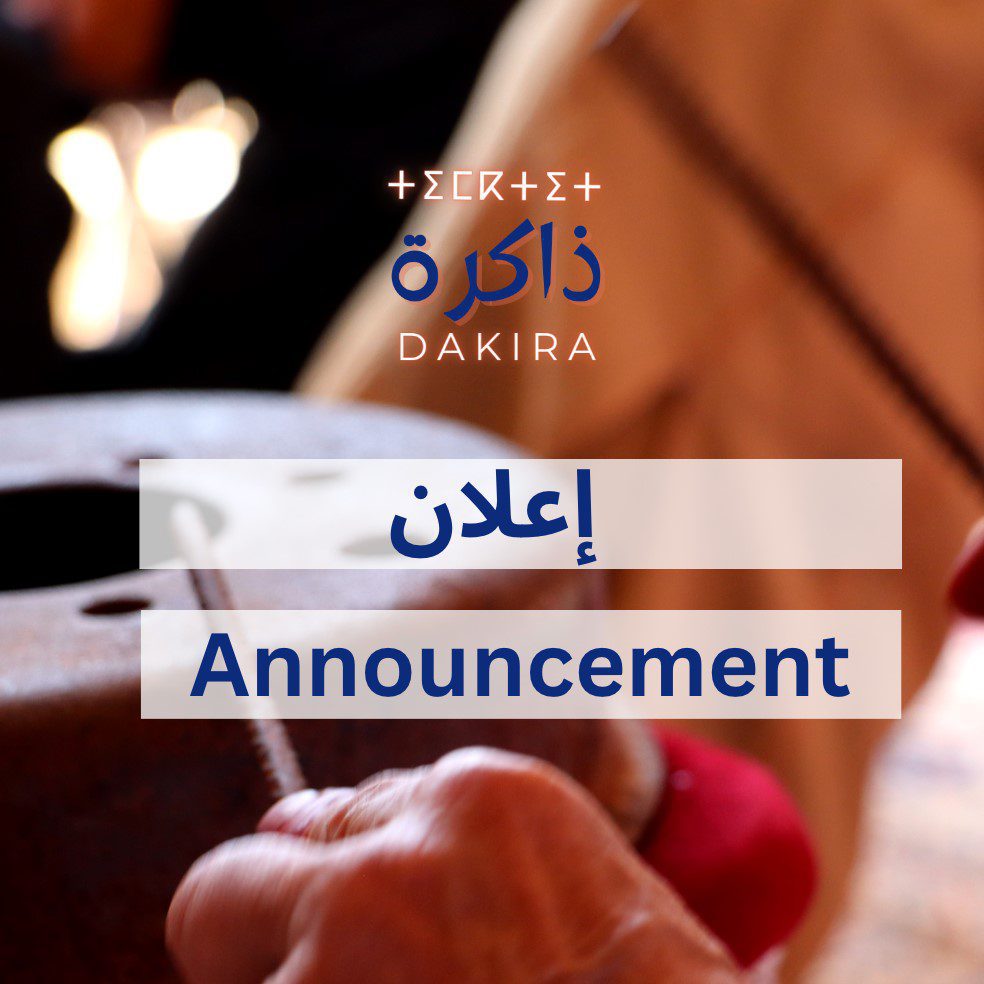 Dear colleagues, I am grateful to announce that Rim Baji is the new Chief of Party of the USAID Dakira program. An expert in communication, media, and youth… 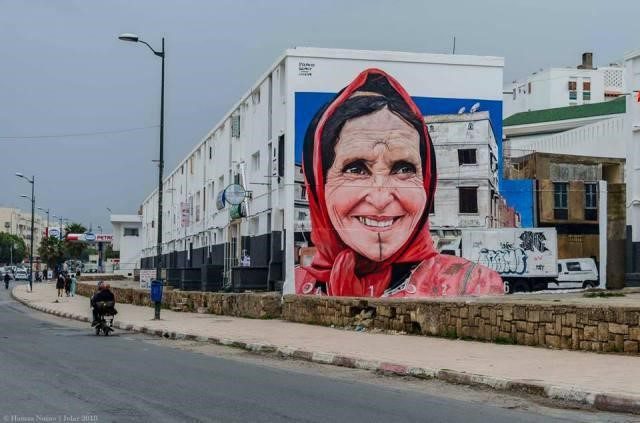