A Conference on Race, Gender, and Migration in the Maghrib 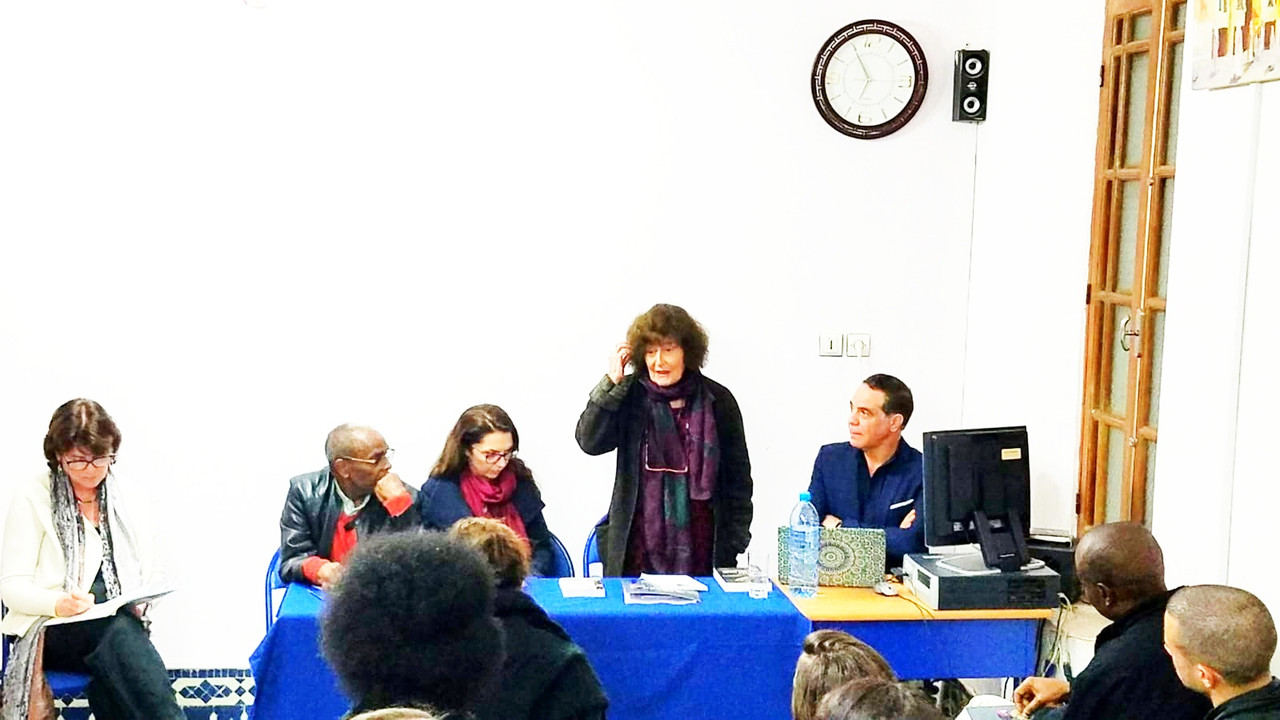 The Center for Maghrib Studies at Arizona State University (CMS) organized a conference on Race, Gender, and Migration in the Maghrib on December 15-17, 2019. The conference was sponsored by L’Unité de Recherche Migrations et Société (URMIS) and Centre International de Recherches sur les Esclavages et Post-Esclavages (CIRESC, CNRS) and hosted at the Institute for Languages and Cultures (INLAC) in Fez. It welcomed twenty-seven presenting scholars from around Africa, Europe, and North America and honored leading Africanist scholar, Catherine Coquery-Vidrovich.

According to CMS Founding Director and lead conference organizer, Dr. Chouki El Hamel, the conference “invite[d] scholars to focus attention on the ways migrations based on race and gender have hybridized the Maghrib from the distant past to the present, including issues related to recent trans-Saharan migration bound for Morocco and the European Union.” It “intende[d]  to foster debate on race, gender, and migration to raise awareness about inclusion and historical injustices.” 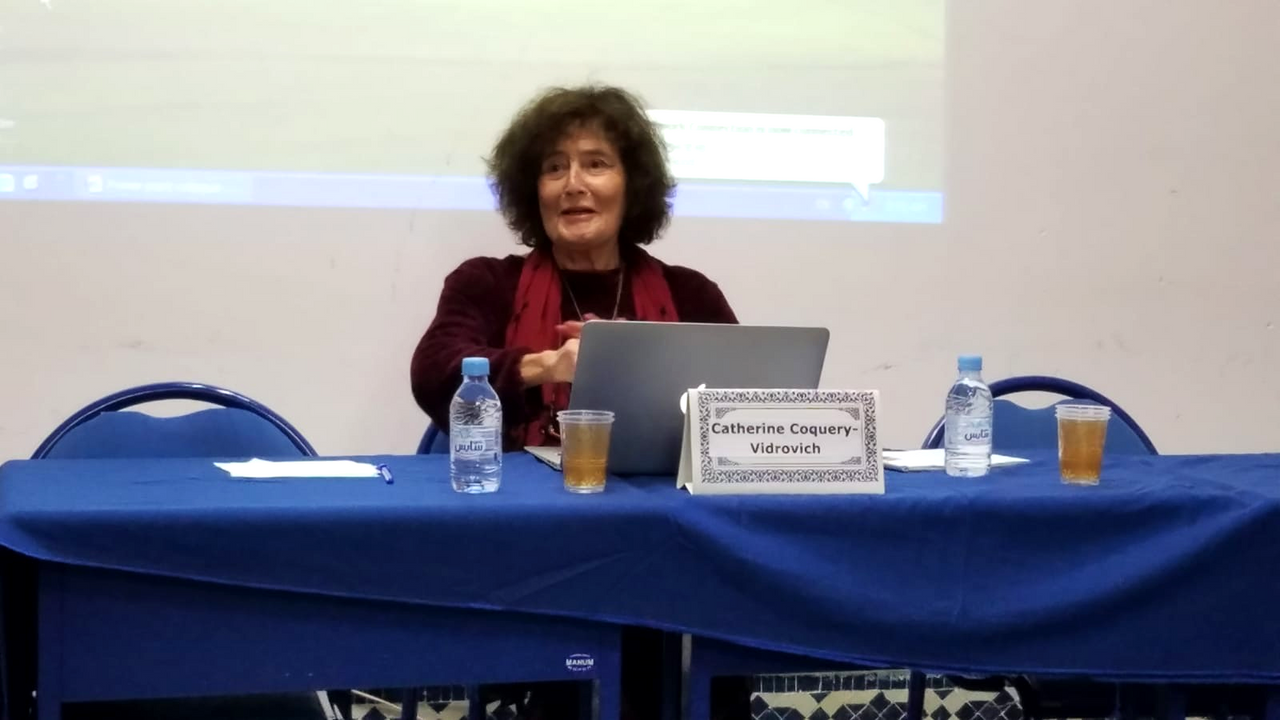 Welcoming addresses were given by Dr. El Hamel as well as Dr. Moha Ennaji and Dr. Fatima Sadiqi, co-founders of INLAC. Dr. Ennaji welcomed participants to the INLAC space, a Center for Arabic and Islamic Studies in Fez which has served nearly 600 study abroad students since its inception. Dr. El Hamel, a history professor in the School of Historical, Philosophical and Religious Studies at Arizona State University focused on West and Northwest Africa, thanked all in attendance for joining the inaugural conference organized by CMS. He celebrated the fact that over 80 paper abstracts had been submitted for consideration, of which an impressive gender-equitable participant pool had been selected to present their research in Fez. 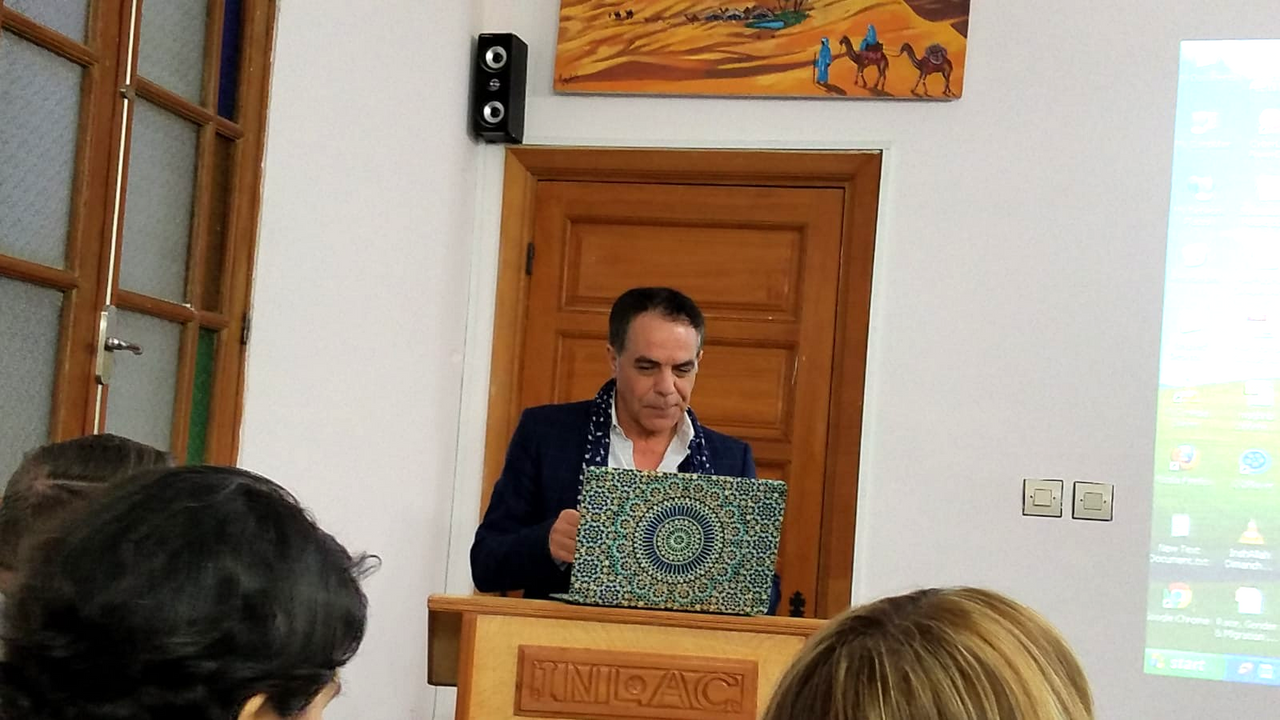 The introductory panel focused on the history and implications of slavery. Spotlight was on a unique four-part documentary series titled Les Routes de l’Esclavage (Slavery Routes) which was “made by Fanny Glissant, Juan Gélas and Daniel Cattier and produced by the French company “Compagnie des Phares et Balises” for the European channel ARTE and broadcasted in May 2018.” Dr. El Hamel, who contributed to the making of the series, describes the films as “historical documentaries on the slave trades (from Africa) and the slaveries (of Africans),” emphasizing that such film projects are “rare.”

When the series aired on Al Jazeera English in August 2018, the first part of Slavery Routes, “476-1375: Beyond the Desert,” which “describes the role of the Arab-Islamic empire in the African slave trade,” according to Dr. El Hamel, was skipped altogether. It’s since been deduced that Al Jazeera likely “intentionally excluded it” because of its specific focus on slavery in Islamic societies. For this reason, it was no small feat that a French-language version of the same episode was screened and discussed on the first day of the CMS conference which took place in Morocco, itself an Islamic society.

Other works discussed by the initial panel are Être Esclave (To Be a Slave) and an accompanying book to the documentary series Les Routes de l’Esclavage (Slavery Routes). 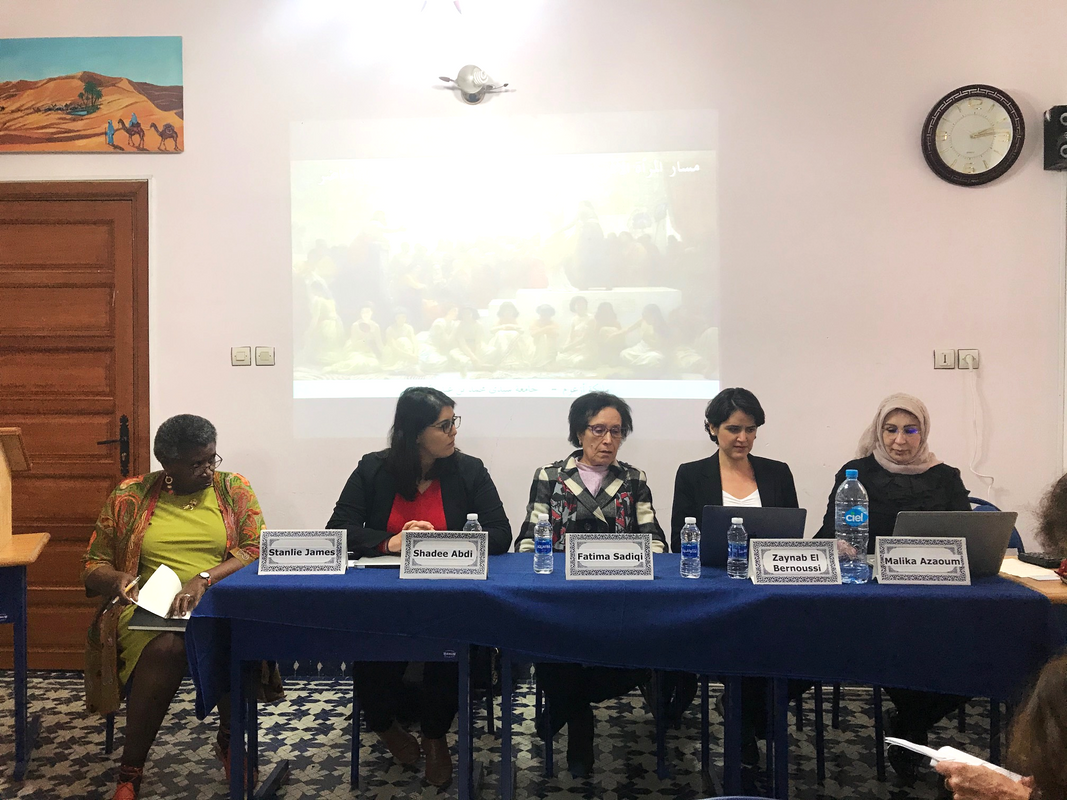 The conference, of intimate size and scope, presented eight other panels composed of a diversity of research over the course of the following two days. Panels focused broadly on Race and Immigration Policy in the Maghrib, Maghribi-European History, Trans-Saharan Migrations, Film and Literature: Immigration in 21st Century Pop Culture, Gender and Sexuality, and Identities.

High Atlas Foundation Program Manager Katie Bercegeay presented on the start-up legal aid program currently being implemented in partnership with the law faculty at Sidi Mohamed Ben Abdellah University in Fez and with partial focus on migration. Several papers presented by other panelists, such as the following, formed a basis for as to why HAF and USMBA are pursuing such a legal clinic:

Other papers offered incredible insight into a wide range of important and intriguing topics, from The Rhetoric of Race in 16th century Maghrebi literature and an analysis of Gnawa Performances to ideas on Women and Self-Exile and the Social Perception of Mixed Parentage Children in Morocco. A full list of scholars who presented on their research as well as more information about the conference and its organizers can be found here.

On day three of the conference, a closing keynote address was given by conference honoree Catherine Coquery-Vidrovich of Université Paris Diderot. 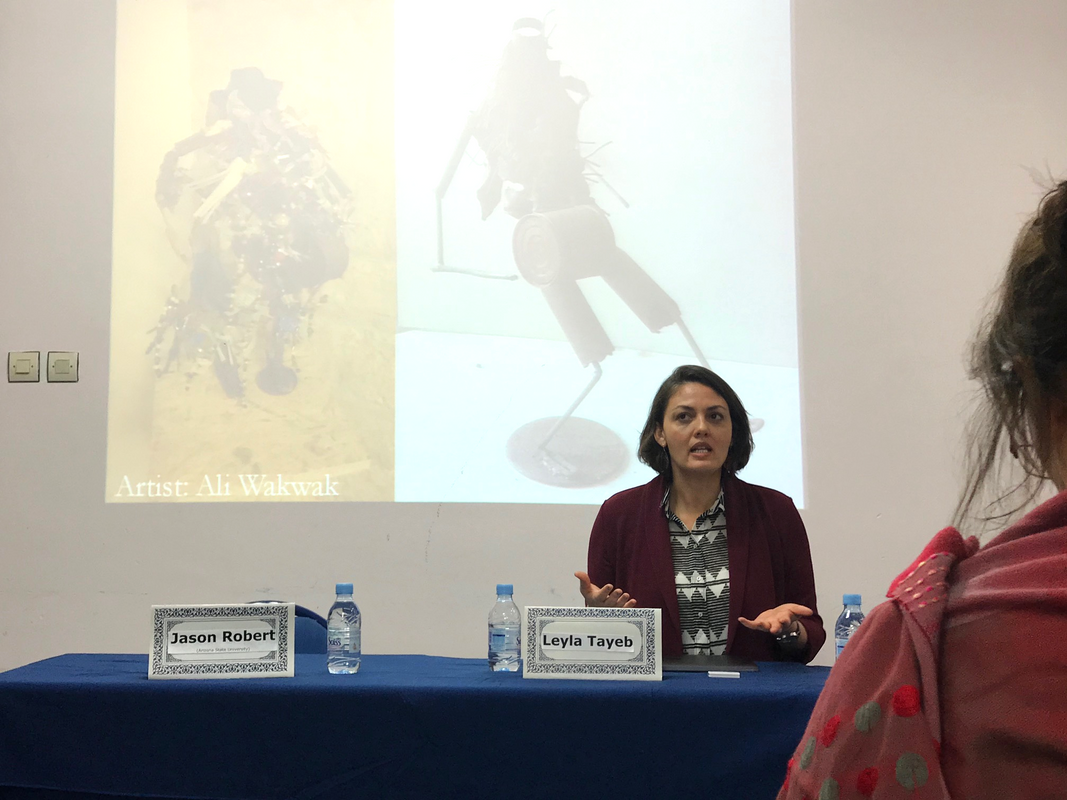 Overall, the conference was an opportunity to take a closer look at the long history of slavery, colonialism, migration, race relations, and gender dynamics in the Maghreb, and how the intersections of these phenomena continue to affect modern-day immigration policies, culture, and society. As evidenced by the multifaceted, multi-layered work of conference presenters, these issues are as complex as they are pertinent to address, particularly following an extended period of taboo-ism. For example:

Though the myth of racial superiority is perpetuated throughout the Maghreb, demonstrated through the disparate treatment among authorities of white versus black bodies in Morocco, as documented by Lorena Gazzotti, we simultaneously find non-black Moroccans embracing (or appropriating) Gnawa ritual, born from black slaves in Morocco, as alleviation to a feeling of disenfranchisement due to institutionalized classism, alludes Cynthia Becker.

And while Maghrebi authorities implement what has been referred to as racialized as border control on behalf of the EU by a number of scholars, North African smugglers, at least as depicted in film, view sub-Saharan black bodies as commodities to be financially exploited for a non-guaranteed ticket to Europe. Such can be called the legacy of European colonialism and some even say globalization: a modern phenomenon reminiscent of the slave trade and a reality that migrant women and children are at highest risk for exploitation while in transit.

However, Moroccan institutions and civil society organizations have made notable progress toward the improvement of both treatment and processing of migrants, as is evidenced by policy and constitutional changes which aim to afford migrants greater rights. In practice, there have also been large waves of regularizing migrants living in Morocco over the last few years. However, there is still more work to be done to improve both policies and practices—and it has been suggested that civil society should play a heightened role in this process. 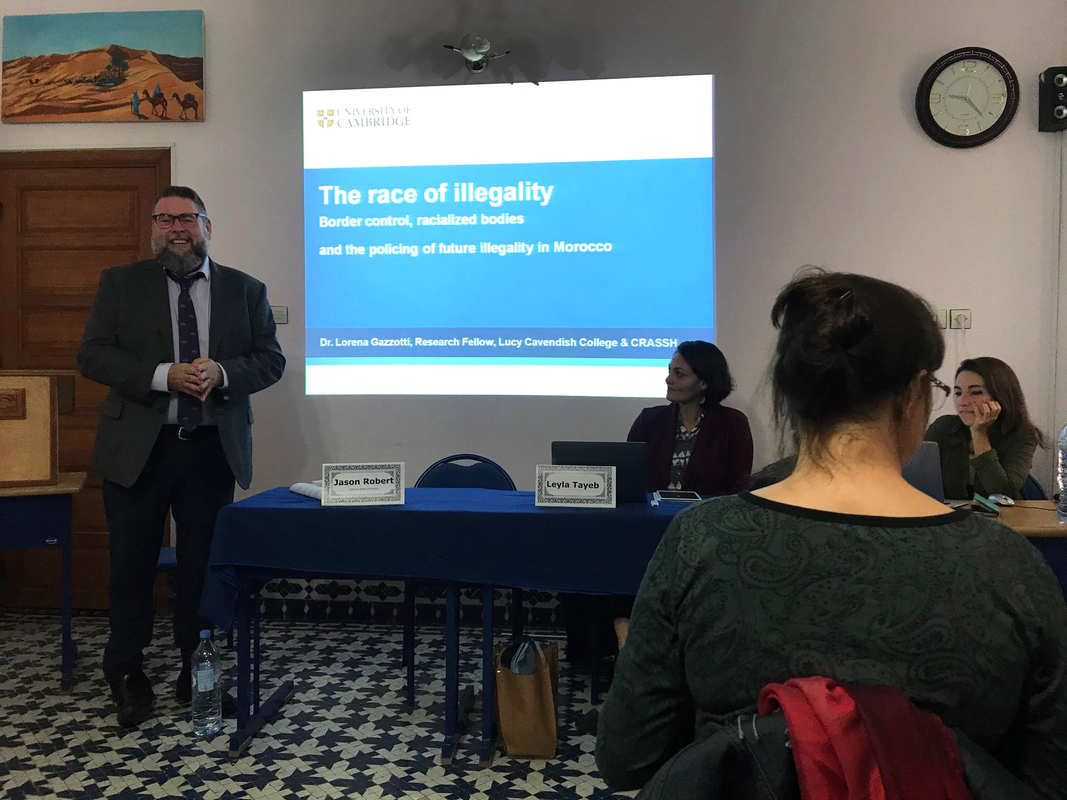 Dr. Jason Robert introduces Dr. Lorena Gazzotti and her paper “The Race of Illegality: Border Control, Racialized Bodies and the Policing of Future Illegality in Morocco”

Gender is unsurprisingly complex as well. Presentations reflected the power that women have had and maintained for centuries despite western perceptions. Even though women’s bodies are commonly policed in places like the Maghreb and Iran, women themselves are taking personal stands and using their bodies as “sites of resistance,” according to Shadee Abdi and Fatima Zahrae Chrifi Aloui. And though historically denied the opportunity for education and literacy, the Amazigh women of the Maghreb may actually have been what we can call the scribes their previously unwritten languages—through common motifs found in the carpets they’ve been making for centuries, suggests Fatima Sadiqi.

The conference ultimately succeeded in its goal to “foster a debate on race, gender and migration to raise awareness about inclusion and historical injustices.”  Moving forward, there is a real need to continue such research, debates, and dialogue in order to learn from the past and provide evidence-based recommendations for policies and practices which have the ability to positively affect existing social structures and institutions for a more equitable and just Maghreb.

The Center for Maghrib Studies will organize its next conference on minorities. It will take place in Tunisia.

The High Atlas Foundation is grateful to have had the opportunity to participate in the conference, present on a relevant current project, and gather ideas from the expertise of scholars researching such timely and critical topics as Race, Gender and Migration in the Maghrib. A sincere thank you goes out to the Center for Maghrib Studies for their tireless efforts, incredible insights, and unmatched hospitality. 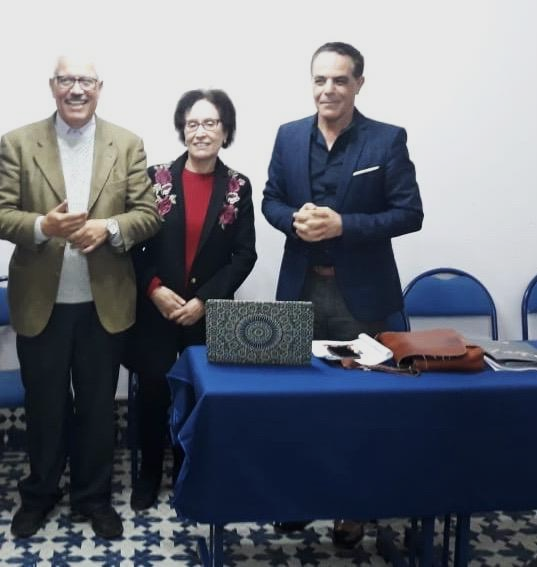 Dr. Moha Enaji and Dr. Fatima Sadiqi, founders of the Institute for Languages and Cultures (INLAC) in Fez, with Dr. Chouki El Hamel.

For additional viewing and reading material which was either produced, analyzed, or referenced by conference participants, a few suggestions:

The Center for Maghrib Studies (CMS) at Arizona State University produces knowledge and understanding of the Maghrib. CMS’s mission, conferences and workshops will particularly emphasize the Maghrib’s African identity by advancing our understanding of North Africa that connects with the Sahara and sub-Saharan Africa, as well as with the trans-Atlantic African diaspora. Moreover, CMS has a pedagogical mission to promote educational innovation, research and dialogue between the US and the Maghrib region.

Nic Pantelick HAF Volunteer Yesterday, I traded the sprawling city of Marrakech for the rolling foothills and winding roads of the Moroccan countryside. Watching this buzzing metropolis retreat…

Tifaouine Angale, in Anougal in the South of Marrakesh HAF Volunteer Down to the village of Anougal, on February 11th, the Farmer-to-Farmer team visited this women’s cooperative for…